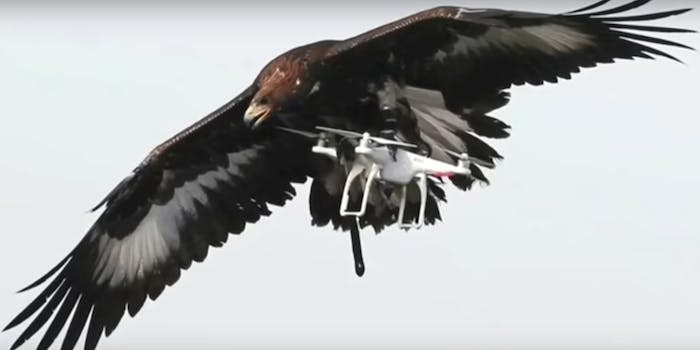 France is training eagles to take down drones

These drone-snatching eagles do what eagles do best—protect our freedom.

Add France to the list of countries using nature to go after technology.

The French Air Force is training eagles to take down drones in Planet of the Apes fashion.

You can see the massive bird grab a full-sized quadcopter right out of the sky in this incredible video:

The eagles will be used as a line of defense against terrorist attacks involving drones, which the Air Force says are a credible threat for a terrorist mode of action in the country, according to the Local.

The most cited method of taking down a drone is with a jammer, which interferes with its signals and drops the UAVs right out of the sky. The French military believes eagles are a more effective and cheaper method.

The Air Force acquired four eagle eggs last spring and began training the birds—named d’Artagnan, Athos, Porthos and Aramis after The Four Musketeers — in the summer when they grew big enough.

They conditioned the birds by placing food on the drones until they associated the flying objects with feeding time.

France reportedly is hoping it will be able to use the eagles in practical anti-drone situations by this summer.