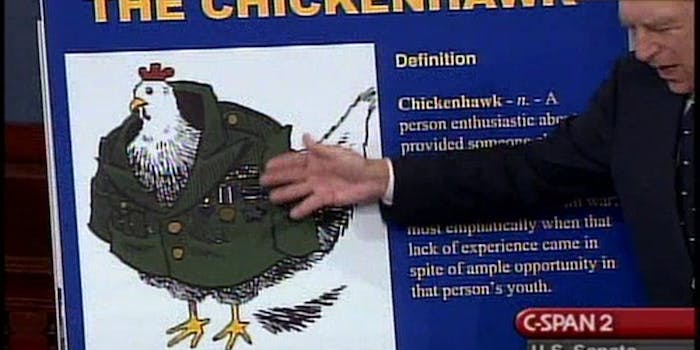 Floor Charts is a new Tumblr featuring the often hilariously bad charts politicians use on the House and Senate floors. Creator William Gray talks to us.

When most people watch C-SPAN, they see stodgy politicians droning on and on about budget cuts, health care, and almost any public issue you can think of.

When William Gray watches the nonprofit network, he sees moments destined for memedom.

Gray is the creator of Floor Charts, a new Tumblr featuring screengrabs of politicians and the often hilariously bad charts they use on the House and Senate floors.

The idea for the blog came from Huffington Post reporter Elise Foley, who recently tweeted about the need for a blog that captures images of charts shown on C-SPAN.

“Nobody answered in five minutes, so I hopped over to Tumblr, where I already had overheardonthespan.tumblr.com and just made another blog,” Gray told the Daily Dot. “Within about 10 minutes, I had a post up about National Adoption Day from the Senate that night, and then just began combing through all the charts I’d saved over the years. So, in a phrase, the 5-Hour Energy and Monster drinks fueled this hobby.”

In five short days, Gray’s blog has posted about 200 different photos of politicians standing next to charts and images of Mickey Mouse, a greedy pig, and a giant heart.

Gray, a C-SPAN producer, says he doesn’t have a favorite chart: Every time he scours C-SPAN’s public video archive, he finds a dozen more. It’s those random, unscripted parts of the show that he really enjoys.

“Some of my favorite moments are actually when we see Congress waiting outside and the charts just inside the doors,” he said. “I’ve had people ask me why Congress doesn’t just use Powerpoint. I’ve watched C-SPAN’s glimpse into Congressional Chart-Making from back in 1994. Personally, I just want to know and see more.” 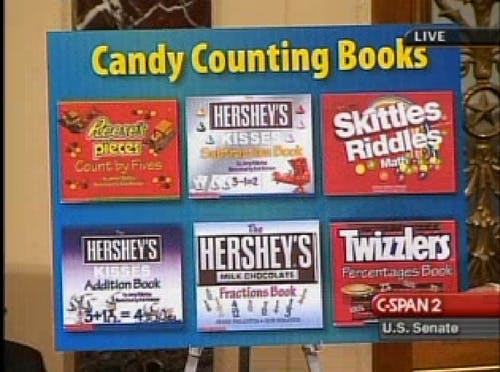 All images via Floor Charts/Tumblr