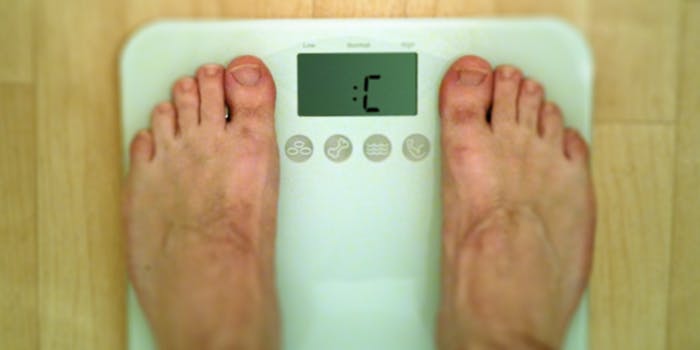 Fitness tech is riding a dangerous line by fat-shaming us

"There’s a fine line between consciousness and all-consuming obsession."

This week, Jawbone announced that it had filed a patent for a device that uses sensors to measure body fat percentage. In essence, the device allows you to cause your phone or fitness-tracking gadget, such as Jawbone’s wristband Up24, to vibrate, so it jiggles your fat. The sensors would then measure the frequency of the fat jiggles to analyze your body fat percentage.

In a recent TechCrunch piece, Jawbone’s new patent was framed as a useful way to measure one’s body fat percentage using your fitness-tracking device itself, rather than relying on a dedicated external device like the Withings Scale, which calculates your heart rate and BMI. And as a writer who occasionally covers tech, I found Jawbone’s device novel and interesting, if not a little silly. (My thighs jiggle enough on their own that I don’t need a smart wristband to shame me into losing weight by jiggling them for me, thank you.)

But as someone who previously struggled with disordered eating, Jawbone’s patent, as well as the slew of other calorie-counting and BMI-tracking and fat-shaming weight loss apps and wearables that have emerged in recent years, struck me as dangerous. Like, really, really dangerous, or maybe even, in some cases, lethal. And I think that someone needs to call out the digital fitness industry for giving the millions of people who struggle with eating disorders an easy way to self-destruct, under the guise of helping them become healthier.

To be clear, I am not saying that activity trackers or diet and nutrition apps are inherently dangerous; they obviously are not, and there are many legitimate reasons why people would use such technology to help them maintain their fitness level. There’s a reason why the digital fitness industry was worth more than $330 million in 2013, and it’s not because all the Fitbits and FuelBands are being snapped up by anorectics who want to make sure they’re burning all the calories from the two stalks of celery they ate for lunch. It’s because they perform a valid service for health-conscious people, and that’s totally great.

But a real problem arises when these devices fall into the hands of people who are not only unconcerned about their own health, but suffer from an illness that makes them hell-bent on their own destruction. And one of the symptoms of this illness is an obsession with exactly what Jawbone and Fitbit offer: the impulse to quantify every calorie that goes into, and out of, your own body.

Part of the issue is that many of these apps are toeing the line between encouraging users to lose weight, and out-and-out fat shaming. Take Carrot Fit, the app that encourages you to exercise with messages such as “You’re not going to get the butt you want by sitting on it” and “Suck it up before you have to suck it in.” Such words of wisdom could maybe be motivating if heard from a trusted friend, or an accredited personal trainer. But when filtered through a nameless, faceless app, they’re catty and judgmental.

Or My Diet Coach, which sends users motivational pearls of wisdom such as “Imagine being the best-looking girl in your class,” and “Do your thighs bother you? Control yourself—it’ll be worth it!” It assumes women are so petty and shallow that only the threat of having a smaller thigh gap than another woman could motivate us to lose weight.

These are extreme examples of fat-shaming rhetoric, but even fitness-tracking wearables like Jawbone’s Up24 and Fitbit, which have been heralded as revolutionizing the fitness industry, can potentially exacerbate disordered eating patterns. Take the case of Lauren (name changed), a 20 year old girl who spent five months at an eating disorder treatment facility, who says she started using My Fitness Pal her sophomore year of college. “It’s a very popular thing in the ED world, because after a while you just memorize the calories on everything,” she says. She estimates that “nearly all” of the other girls in her facility used similar diet-tracking and fitness apps.

In a 2013 interview with the New Republic, Dr. Kimberly Dennis, the CEO and director of eating disorder treatment facility Timberline Knolls, supported Lauren’s contention that fitness technology had exacerbated the symptoms of eating disorder patients, estimating that nearly 75 percent of her patients had used smartphone apps or wearables to obsessively keep track of their calorie intake, or how many steps they’ve walked that day.

Self-quantifying apps like My Fitness Pal, which has nearly 50 million users, are intended to help users become more fit by making them more conscious of what they eat. But there’s a fine line between consciousness and all-consuming obsession. In the United States alone, where an estimated 10 million women and girls and one million boys suffer from eating disorders, it is nearly inevitable that some members of this demographic will intersect with My Fitness Pal’s user base, and it is just as inevitable that self-quantifying apps like My Fitness Pal will exacerbate the effects of what Dennis calls a “numbers-driven disease.”

Humans, in general, are prone to self-analysis; we derive a cold thrill from being able to manage our lives more effectively by measuring them. With tracking apps, we can do this better than we ever have before, quantifying everything from our meals to our work habits to what goes on in our bedrooms.

Whether this tendency toward self-analysis is healthy for our minds is up for debate. But I’m inclined to say that it’s definitely not healthy for our bodies. Research has shown that calorie-counting is not an effective method of losing weight, as it fails to take into account the complex effects food has on our bodies; you are not a machine whose output is exactly equivalent to your input. And even if you don’t suffer from anorexia or bulimia or exercise bulimia, calorie trackers and pedometers and fitness apps can lead to disordered eating, because they force you to see what should be basic life needs (i.e., food and exercise) solely in terms of arbitrary numbers.

It’s not only unnecessary to obsessively track your calorie input and body fat and physical activity, as the Fitbit Tracker and Jawbone Up24 do; it’s dangerous. This doubly applies for ED sufferers, for whom self-quantification is not a health and wellness tool, it’s a symptom of a very real disease that kills people.

There is a question as to what activity trackers and weight loss apps can do to prevent their product from falling into the wrong hands. The answer is, probably, very little. But at the very least, they should issue a clear disclaimer to customers, essentially saying their products should not be used by those with a tendency toward obsessive-compulsive or disordered eating patterns. (To be fair, My Fitness Pal features such a disclaimer for their group forum posters in their community guidelines, though perhaps a more obvious warning is warranted.)

Would such a disclaimer actually keep ED sufferers from using their product? Probably not. But at the very least, it would send a clear message that health is not synonymous with self-deprivation, fitness is not synonymous with self-control, and beauty is not synonymous with starvation. This message should be self-evident to everyone by now, but sadly it is not. And because we live in a world of thigh gaps and bikini bridges, where rich people need an app to shame them into putting down a cheeseburger while poor people die from malnutrition a few miles away, where girls and women use calorie-counters and step-tracking wristbands and fat-jigglers to figure out the best way to literally starve themselves to death, it’s a message worth remembering.

Photo by magnus_d/flickr (CC By 2.0) | Remix by Max Fleishman