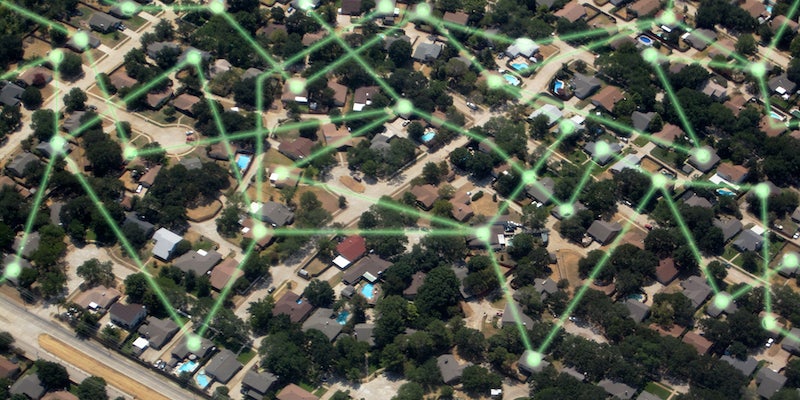 Everything you need to know about mesh networks

Researchers, Redditors, and political activists all believe the mesh net could change the world for the better. So what is it?

New apps pop up in Apple’s App Store every day, some with more fanfare than others. FireChat, a messaging app, showed up quietly. The free tool didn’t have big-name cachet or the kind of sexy hook that has propelled services like Whisper and Secret into Next Big Thing territory. If you download it now, there’s not a whole lot going on; it’s still new and underutilized. But FireChat, which was developed by peer-to-peer Internet sharing company Open Garden, is potentially one of the most important apps in the App Store: It could take the idea of a mesh net mainstream.

And what is a mesh net, exactly? A mesh network is an alternative to the Internet, based on connections that move from device to device. So for FireChat, if I download it and talk to someone in my area who also has the app, we can exchange messages without using data or going through a centralized network. Mesh networks create resilient communication channels because, like a chain of mesh, the small inter-device links create a hard-to-ruin connection. 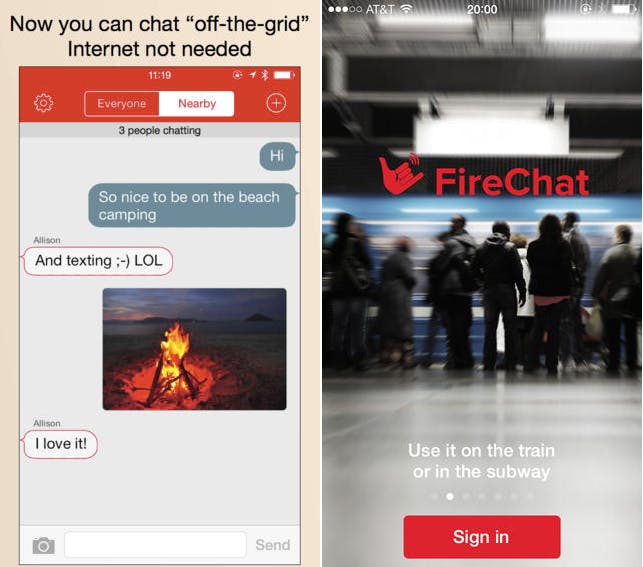 Anyone with the know-how can set one up, and they can be configured to adjust automatically to the availability of bandwidth and other resources, so once a mesh net is up, it is very hard to destroy. In fact, a mesh network is basically as hard to murder as Voldemort. To shut down a mesh net, you need to shut down every single individual connecting point, just as Voldemort’s horcruxes kept him alive even when his main body was destroyed. Except mesh nets aren’t evil wizards, so we’re good.

Done right, a mesh net will be immune to firewalls and government Internet bans, something important to consider for countries with censored Internet like China and Egypt (and something that may be of special interest to people in Turkey after the Twitter ban debacle). They can also come in handy during emergencies, when Internet service goes out (in fact, an Australian organization created a mesh net called Serval specifically for this reason). They can also be cheaper than the regular Internet. Micha Benoliel, Open Garden’s CEO, believes establishing mesh nets is necessary to building better overall connectivity. “We need to create small Internets that can function on their own and [then] connect them to the big Internet,” he told Technology Review.

FireChat serves as an excellent prototype for mobile mesh networking tools. It allows users to communicate with people nearby without using the Internet or cell reception. FireChat creates new, highly localized networks using Bluetooth and Wi-Fi that allow phones to connect to each other directly. This is called “multipeer connectivity.”

At first, it looked like FireChat would stay Apple-only, since it uses new connectivity technology developed specifically for iOS 7. But it didn’t take Open Garden long to find a way to establish a similar multi-peer connectivity for Android; FireChat showed up in the Google Play store a few days ago. The two apps can’t interconnect yet, because Open Garden used the walled iOS API for its Apple version, but it developed its own proprietary technology for the Android version. The fact that the company already created its own parallel Android technology is extremely promising, and Open Garden is working to expand FireChat’s capabilities to bring it closer to a true mesh net. Right now, FireChat can only transmit data from one phone to another, or from one phone to many, provided these devices are nearby each other. But according to Technology Review, Open Garden is developing ways to hopskotch data further, passing it between phones that aren’t nearby each other… which would be a vast improvement.

You might be wondering why this is so important. After all, when are you ever going to want to strike up a conversation with strangers around you (on the slim chance that they also have the app)? Unless you’re really into the idea of striking up this conversation without using good ole’ fashioned data, there are already chatting apps that allow local strangers to connect, like Yik Yak.

The local-chatting element of FireChat isn’t the important part (even though CNN pointed out that FireChat’s localized chatting could be a good way to get in touch with people if you’re going on a trip, since it would allow people browsing a bazaar or store to check in with each other without incurring roaming fees). The important part is that the app provides an alternative communication system on a network level. If Open Garden can continue to expand its connectivity capabilities, it could flesh the app into a formidable mesh net. And mesh nets are definitely worth exploring. FireChat is one of the first apps that takes advantage of multipeer connectivity technology—and supporters of the mesh net believe that this kind of technology can be leveraged to create a new intranet that could protect net neutrality, evade government oversight, and change the world.

The idea of an alternative peer-to-peer network is a big deal for the security-minded because data passed among devices does not first go through wireless carriers or Internet service providers (ISPs). It does not bounce to far-away servers. And because mesh nets lack a central authority, it’s very hard to verify the identity of people using them.

FireChat is not immune to surveillance, because anyone can see what’s going on by jumping onto the network, and that’s one of the disadvantages of mesh nets. But it does provide a chance to evade the kind of large-scale data-scraping that has gone on in the past, and since mesh nets are invisible to the larger Internet, the only way to monitor what goes on in them is to be logged on to them. Other mesh net projects have more comprehensive security features; Project Mesh Net has created a mesh net called Hyperboria which uses a specific router called cjdns that provides end-to-end encryption, for example.

FireChat is exciting because it’s an example of mobile mesh networking, but it’s far from the only ongoing project. On Reddit, the idea for a widespread “dark net” (the favored term later shifted to “mesh net”) has been eagerly discussed for years. There are localized versions of mesh nets all over the place; Brooklyn’s Red Hook neighborhood has a mesh net that grew popular after Hurricane Sandy knocked out more conventional ways to communicate; in Athens, Greece, a community built a mesh net to combat poor Internet connectivity. In Spain, there’s a mesh net called Guifi that serves over 23,000 people, making it the world’s largest—and it started back in 2004. During Occupy Wall Street, the idea of developing mesh nets gained favor with activists looking to develop an alternative to the Internet. Even the United States Navy has toyed with using mesh net communications to create short-term networks.

The idea is still underground, but it’s good enough to surface in a major way. In an opinion column for Wired, Primavera De Filippi argued that it’s time for mesh nets to be taken seriously because they could become extremely important tools for community-building and governance.

So that innocuous-looking FireChat app? It represents a step forward in bringing mesh nets to the general public—and mesh nets represent what is perhaps the best chance for bottom-up, unregulated, digital communication.