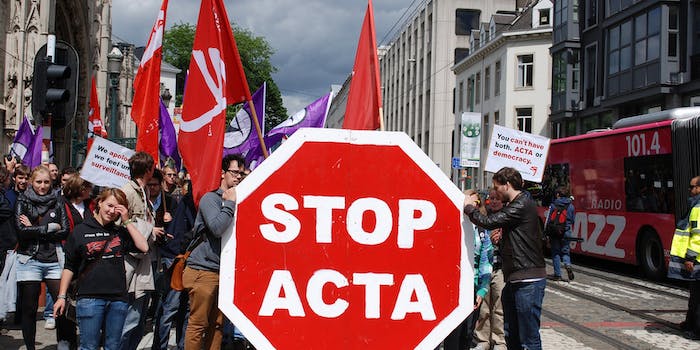 It's an "epic" moment for internet rights.

Internet activists, rejoice: the Anti-Counterfeiting Trade Agreement (ACTA), criticized for giving governments draconian power to enforce copyright around the globe, is finally only one vote away from worldwide defeat.

Though the European Union Parliament won’t formally vote on the agreement until July, the Committee on International Trade (INTA) voted to recommend Thursday, with a vote of 19-12, that the EU Parliament reject ACTA.

Though there’s no way to guarantee how the E.U. Parliament will vote, it will be hard for it to ignore the opposition to ACTA.

Four other E.U. committees voted on ACTA before INTA’s vote, and each of them recommended to reject the agreement. INTA is the final committee, and by far the most influential, to make a recommendation.

Without the E.U.’s signature, ACTA will be effectively dead, left unratified by the countries that already signed it.

“This was the first time that the citizens of Europe won against combined forces of big industry and the Commission,” she said in a victory speech.

Pirate Party founder Rick Falkvinge, who was present for the vote, noted that the INTA vote had its hitches.

The European People’s Party, which supports ACTA, repeatedly forced revotes by submitting more than they were allowed, Falkvinge tweeted.

Jérémie Zimmermann, a spokesperson for the digital activist group La Quandrature, noted that with an E.U. rejection of ACTA in sight, large-scale copyright reform might follow.

“With a political symbol of such a global scale, the way will be open for copyright to be reformed in a positive way,” Zimmermann said.

Zimmerman also noted that ACTA’s final vote will be held on July 4.