This iPhone case is like an origami VR headset

It's not just a figment of your imagination.

What if there was a gateway to another world attached right to your phone? It’s not a figment of your imagination; it’s just Figment, an iPhone case that acts as a pop-out virtual reality viewer.

One of the biggest barriers to entry for virtual reality is the equipment; while options like Google Cardboard have simplified the casing down to an easy-to-assemble corrugated frame, it’s still bulky and not made for easy, on-the-go usage, and there’s not much to offer in terms of permanence.

Figment’s primary role is durability—it is a phone case, after all. 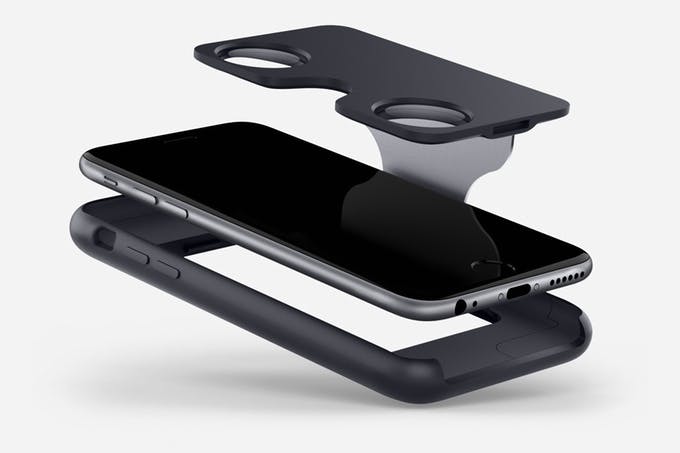 Quantum Bakery’s creation is designed to maintain a slim fit around the device; the polycarbonate plastic coated in silicone rubber adds minimal bulk while keeping the buttons accessible and ensuring the phone survives any fall your clumsy hands may put it through.

But what Figment does that other cases don’t is provide an always-accessible window into the world of virtual reality. The “Origami” VR viewer is folded into the case itself and detaches when you want to take a glance at an immersive digital world.

The designers are sure their build will be able to provide the function of a Google Cardboard-style headset without the limitations that come with it. Despite the lack of divider between lenses, the images converge correctly without any ghosting and there are apparently no issues with ambient light interfering with the experience.

The Figment VR case is currently searching for funding on Kickstarter and already surpassed its $75,000 goal. Backers can get their hands on the portable VR solution for as low as $49; the accessory is expected to retail at $79 once it’s available for retail in 2016.