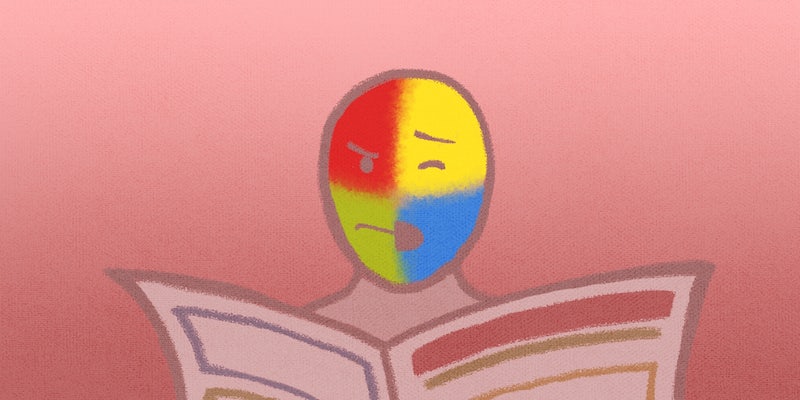 Creating a news reader based on your face

It’s no secret that people choose their news outlets based on political and personal beliefs. Conservatives ensconce themselves in the protective bubble of Fox News, while liberals cozy up to the reassuring voices of MSNBC. But did you know that you can also get customized news based on your face?

That’s the premise behind Fickle News, a site that activates your webcam and displays a group of articles that match your perceived mood. Anastasis Germanidis, the developer behind Fickle News, said that the idea for the site grew out of his interest in affective computing, an area of programming that tries to translate emotional clues into data points so that computers can better help people.

“Fickle News uses affective computing to present an extreme version of media personalization, where the news that you see correspond exactly to what you’re feeling right now,” Germanidis told the Daily Dot in an email. “The question is, do you want a future where you only get news that corresponds to your current experience? Or would your rather be exposed to a wide array of emotions and experiences and be challenged with discordant information?”

The purpose of Fickle News, he said, is to get people thinking about the effects of their personalized media spheres.

Fickle News took Germanidis only “a couple of days” to build, in part because he had worked on similar projects in the past. The technology at the heart of the site is a set of Javascript code called clmtrackr, which uses a computer’s webcam to scan the human face and translates it into a map of 70 different data points.

Of course, I had to try Fickle News and see what stories my face was asking for.

First, I gave my webcam a nice big smile.

The site recognized that I was happy and showed me heartwarming stories: a blind service dog, the Internet rescuing a lonely teenager on his birthday, and an airline employee going the extra frequent-flyer mile.

After reading these stories, I found myself experiencing a Grinch-like backlash of negativity. How, I asked myself, could these people find any joy in what was essentially a terrible world?

Fickle News captured my Scrooge-esque outburst and immediately understood what I needed: a harsh dose of reality, courtesy of the site’s upsetting news selection.

A girl tried to poison her mom for taking away her iPhone? A U.S. state is sliding back into the Dark Ages? Migrant workers are being exploited? George Zimmerman is still talking? Now that’s the self-loathing I needed to bathe in.

But even I could only take so much bad news before my expression began to reflect my sinking mood. That’s when I started seeing sad news.

Fickle News began to feed my sadness with its most depressing stories—building collapses, bus crashes, and murders. But then something interesting happened: I saw a touching story, the one in the top left about the mourners at the Israeli funeral, and my expression softened at this heartwarming display of humanity and solidarity.

As my eyes widened, Fickle News shifted to its last news mood: surprise.

I will admit, I was very surprised that a man could get drunk on chips. I was equally surprised that the French Air Force had not managed to identify the mysterious drones flying over Paris for a second night. And in the event that I cared enough to click, I’m sure I wouldn’t believe what that spa used in its facials.

It feels like what Fickle News might need is a reaction feature. Instead of mimicking my face with similarly emotional news, maybe it should see those data points and deliver the news I need. If I’m sad, give me uplifting stories; angry, calming ones. That could be seen as placating the reader, but adding fuel to a fire isn’t necessarily better.

Germanidis said he probably won’t add more features to Fickle News, but he does plan to design “similar interfaces” that use affective computing to provoke the same questions about what he called “this (dystopian or utopian) view of the future of emotional personalization.”

“If we want a future where technology helps us see beyond ourselves instead of reinforcing what we already see,” he said, “we need to be actively working towards that future.”