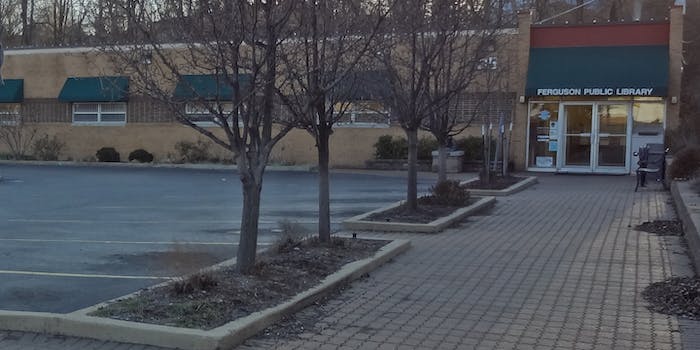 It's not all doom and gloom in Ferguson.

Ferguson might be national shorthand for police brutality, racial tension, and injustice, but it’s not all doom and gloom.

More than 10,000 people from around the world have donated over $300,000 to the Ferguson Public Library, its director, Scott Bonner, told the Daily Dot.

$300,000 is a lot of donation money for any library, much less one in a town as comparatively small and poor as Ferguson, Mo. But support for the library swelled online, buoyed by reports that it would stay open with volunteer classes for kids even though schools closed during the protests.

Beneath the library’s newfound spotlight, Bonner did an “Ask Me Anything” (AMA) session on Reddit. A tailored wishlist of books that anyone could purchase sold out, was updated, and sold out again; as of this writing, there are 30 books on the most-recent Ferguson list that haven’t yet been purchased and 107 that have.

“We’ve been busy,” Bonner said. “Basically we have our usual crowd, plus whenever we’re doing extra events, we’re getting extra people. Tuesday, we had a small horde because we had volunteers to help teach kids, so we did the ad hoc school thing. Plus our usual traffic, plus document recovery from the Secretary of State’s office, who’s using one of our rooms. But today looks more like a normal day.”

In addition to public financial donations, the library’s benefitted from a host of authors who personally sent signed books. The Fault In Our Stars author John Green pledged signed copies of all his books after Bonner said in his AMA that they were popular in Ferguson. But he’s far from alone. Author Joelle Charbonneau started a program called Hope Through Stories to convince fellow writers to follow suit. Bonner said he’d received “stacks” of books through the program.

“We have sensible, frugal plans of what to do with [the donations],” Bonner said. “We’re librarians and have plans to make sensible use of every dollar.”

Bonner said he needed his board to approve everything, but he hopes to save much of the money, use some to repair the library’s worn carpets, and to maybe hire a second librarian to focus on programming, as he’s the only full-timer on staff.

If you want to join in on the giving, you can donate to the Ferguson library in Bitcoin or through Paypal.