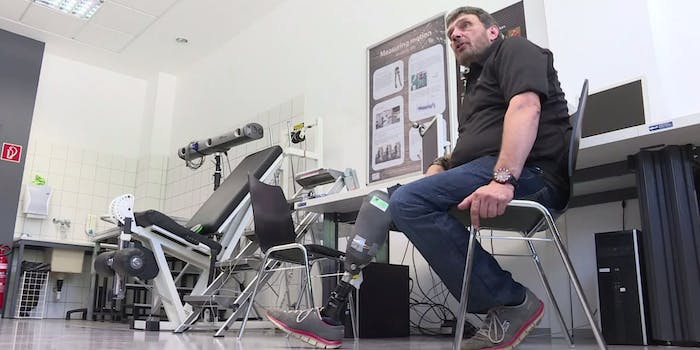 Researchers at the University of Applied Sciences Upper Austria have created the world’s first prosthetic leg that can actually “feel.”

To make the prosthetic work, doctors surgically relocate nerve endings in the upper part of the leg to the surface of the site of the amputation. The nerves react to stimulators in the attachment cup of the prosthesis, which are in turn connected to sensors in the artificial foot.

Wolfgang Rangger, a former teacher who lost his leg to a blood clot, said the prosthesis gave him a “second life,” in a press conference in Vienna. Rangger said that the new sensation allows him to feel rocks beneath his feet and keep his balance when walking on ice.

The prosthesis has also relieved a great deal of phantom limb pain that previously kept him up at night and dependent on morphine. Phantom limb syndrome is a mysterious condition where amputees still feel sensations in their missing limb. The sensations—which affect somewhere around 80 percent of amputees—can range from mild itching to intense, relentless pain as Rangger felt. (Unfortunately, most of the time phantom limb syndrome is painful).

Researchers aren’t totally sure why or how phantom limb pain occurs. That Rangger now has just mild pain and is able to return to an active lifestyle should be an interesting clue into the pathology of phantom limbs. The research team isn’t alone: DARPA has been actively developing prosthetic feedback technology to aid U.S. veterans who have lost limbs in combat.

In the same Vienna press conference, Dr. Hubert Egger, who led the study, suggested that Rangger’s pain went away because now the brain is receiving regular signals from where the limb should be, so it’s no longer “searching” for it with aberrant signals.

In addition to reporting on the press conference, Extreme Tech reported that Egger has also created prosthetics controlled by thought, allowing amputees more mobility through prosthetics that ever before.