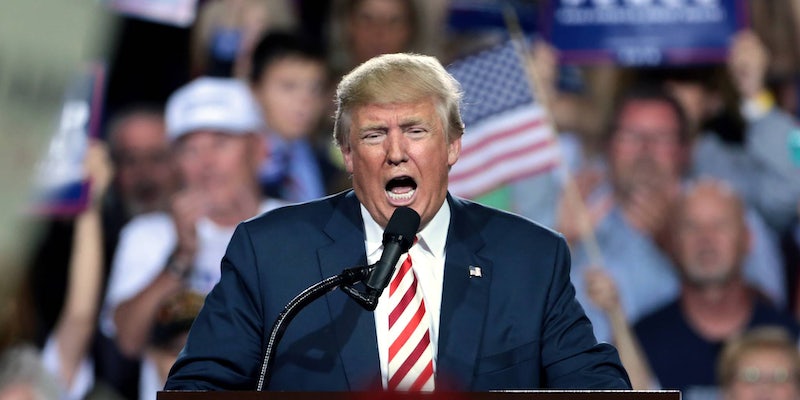 The ruling was unanimous.

In a blunt repudiation of the Trump administration, a federal appeals court decided unanimously to uphold a temporary restraining order on President Donald Trump‘s ban on travelers and refugees from several Muslim-majority countries.

The 9th U.S. Circuit Court of Appeals said in a 29-page opinion issued on Thursday that it would not lift a hold on Trump’s travel ban. All three jurists on the panel agreed the stay on the travel ban should remain in place.

The decision to uphold the temporary stay on the travel ban is not a ruling on its constitutionality.

U.S. District Judge James Robart on Friday issued a nationwide stay on the travel ban after lawsuits filed by Washington state and Minnesota.

The travel ban, which sparked worldwide chaos and nationwide protests after its implementation nearly two weeks ago, forbid entry for anyone from seven predominantly Muslim nations—Iran, Iraq, Libya, Somalia, Sudan, Syria, and Yemen—on national security grounds. Some 60,000 people had their visas revoked due to the ban.

The Department of Justice argued before the 9th Circuit that Trump’s executive order was within the legal bounds of the president’s authority. Attorneys for Washington state and Minnesota said it unconstitutionally barred people entry based on their religion, supported by Trump’s own comments about Muslims.

In their decision, 9th Circuit judges concurred, noting that Trump’s threats of a “Muslim ban” were grounds for discrimination.

THIS IS BIG: 9th Circuit judges say Donald Trump's sweeping talk of a "Muslim ban" can be used as evidence for discrimination. pic.twitter.com/08vXUIQiN9

Awaiting the 9th Circuit’s decision, Trump condemned Robart as a “so-called” judge and argued the “court system” would put Americans in “peril” if the stay on his ban was upheld.

Soon after the decision, Trump warned, in all capital letters, “SEE YOU IN COURT, THE SECURITY OF OUR NATION IS AT STAKE!”

The case will likely now head to the Supreme Court of the United States, where it risks a split 4-to-4 decision due to the vacant ninth seat.