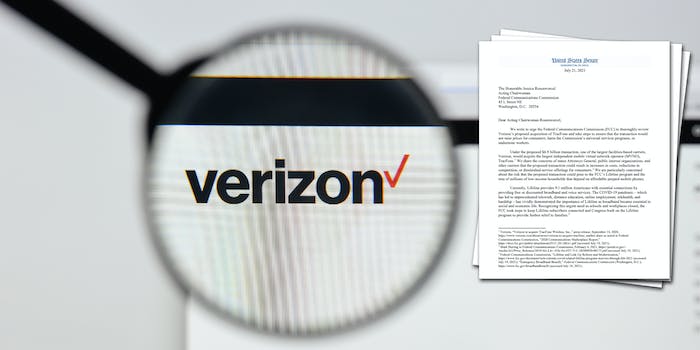 The senators asked the agency to 'thoroughly review' the proposed acquisition.

A group of Democratic senators is urging the Federal Communications Commission (FCC) to “thoroughly review” Verizon’s proposed acquisition of TracFone to make sure that it won’t raise prices for consumers.

Verizon announced last fall that it had agreed to buy TracFone for $6.25 billion. TracFone specializes in low-cost prepaid phones.

The senators said 1.7 million Lifeline subscribers in 43 states use TracFone’s SafeLink Wireless brand. The senators said TracFone was the “largest Lifeline operator” so its “importance to the program cannot be overstated.”

“If Verizon failed to advertise and promote its Lifeline product as aggressively as TracFone has as a standalone company, the transaction could add to the unfortunate decline in Lifeline adoption,” the senators wrote. “The need for the FCC to rigorously scrutinize this transaction is further heightened by the declining competition in the wireless market and the stagnating set of options for Lifeline eligible households created by recent mergers and acquisitions.”

In the letter, the senators ask that the FCC probe Verizon and make sure that it requires participation in the Lifeline program within the same geographic area and service offerings that TracFone currently does; make 5G networks and equipment available to Lifeline customers on the same basis as it would be to other Verizon customers; maintain the existing packages to TracFone customers; market Lifeline and prepaid plans at least at the same level TracFone does; and ensure that Verizon and TracFone employees aren’t harmed by consolidation.