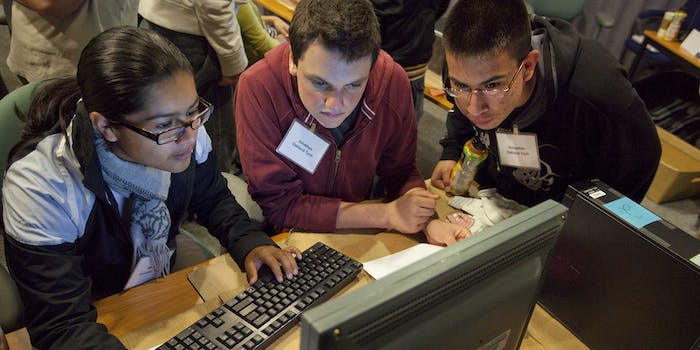 President Obama has set a goal of providing Internet access to 99 percent of U.S. classrooms.

More details are emerging about President Obama’s ambitious proposal to put Internet access in 99 percent of America’s classrooms, including a plan to have cell phone users foot the bill.

Hoping to circumvent an oppositional Congress, President Barack Obama is calling on the Federal Communications Commission to raise cell phone fees to help fund ConnectEd, which he hopes will be a signature educational achievement in his second term. Though it’s not unprecedented for the FCC, an independent organization, to collect fees to finance specific government programs, the proposal has rankled some conservatives who say cell phone customers are being unfairly squeezed to cover the cost of the president’s initiative.

ConnectEd was announced earlier this summer, but the specifics have trickled out to the public slowly. The overarching goal of the program is to have 99 percent of public classrooms online within five years.

Faced with a hostile Republican congress that is loathe to approve new spending, the president has been forced to come up with an alternative method to fund this project. It’s unclear how much individual consumers would have to pay in the form of new fees to fund the program. What is know though is that congress would not have to approve such a change by the FCC.

It’s not unheard of the FCC to take this kind of action. They already charge a rate on consumers to help fund phone access for the poor. But opposition members of congress, such as Rep. Fred Upton (R-Mich.), say the program would be more appropriately funded as expenditure by congress.

“Most consumers would balk at higher costs, higher phone bills, and I sure hope that this is not part of the equation that ultimately comes out,” Upton told the Washington Post. “If they pursue that course, there’s going to be pushback, absolutely.”

But Obama believes the ConnectEd program is important enough to justify the pursuit of this non-congressional funding strategy. While announcing the program at a school in Mooresville, N.C., in June, the president said that getting children online early was critical for preparing them to take part in the 21st century global economy.

“We are living in a digital age, and to help our students get ahead, we must make sure they have access to cutting-edge technology,” the president said in a statement.

The U.S. lags well behind many other industrialized nations when it comes to affordable broadband access. As of 2012, the FCC said only 196.7 million Americans had access to and were using high-speed Internet. That means 38 percent of the country, roughly 119 million people, still did not have Internet access, either because they didn’t want it, it was too expensive, or the infrastructure wasn’t available.

But not everyone is convinced that increasing classroom connectivity is such a great idea. UC Berkeley researcher Kentaro Toyama says that technology is a tool to help in the educational process, but not a solution unto itself. In the hands of incompetent educators, it can even do more harm than good.

“[A] school with the firm intent to teach well and with the capacity to do so can benefit from technology,” Toyama said. “[B]ut a school that is either indifferent to its students, or woefully deficient in its teaching capacity will only be burdened by the effort of maintaining the technology.”