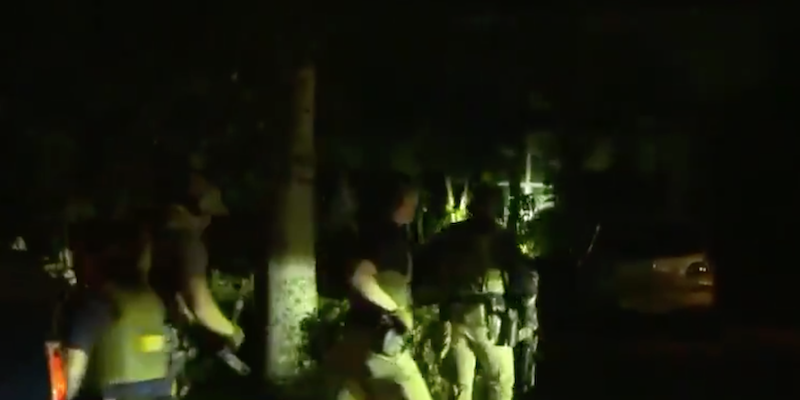 He is expected to be arraigned in court on Friday.

The raid, however, came on the 35th day of the government shutdown, which began before Christmas. The shutdown has seen federal workers go without pay since early January.

So the FBI agents who carried out the raid were doing so without being compensated for it. But because Stone is a notorious online shitposter and troll—who has made a career by being one of the shadiest actors in politics—people figured on this one, the FBI didn’t mind working for free.

The #FBI agents who arrested #RogerStone this morning are working without pay. Hell, I would have done it for free, too, as a public service.

Actually, they bore the cost of gas to get to work with out pay, so technically, the FBI agents paid to arrest Roger Stone.

“This one is on the house.” https://t.co/eKszTClJIs

They was some speculation online that the agents were furloughed workers, who showed up for work today just to carry out the raid.

Furloughed agents VOLUNTEERED to arrest him. Imagine being that big a dirtbag, that they say "oh no problem, this one's on the house."

“Can’t miss this one. We’re talking a top 10 evil weirdo in the Trump universe. Maybe I’m getting carried away. At least top 20.” https://t.co/qjonmLqG9U

“I think these are furloughed FBI workers, working without a salary, doing their job, showing up to work without pay, and that job today involves taking into custody and arresting somebody very close to the president,” @JohnBerman makes the point on @NewDay just now

Roger Stone
invented the wall
that shut down the government
that furloughed the FBI agents
who arrested him at dawn. pic.twitter.com/1Do9HBEpUg

However, according to an FBI spokesperson, the agents who conducted the raid have not been furloughed and have been working since the shutdown began. They have, like all government workers, been doing their job without pay.

Stone was long considered a go-between for the campaign and WikiLeaks. Mueller’s indictment levies that exact charge against him, saying Stone discussed the release of emails from the Hillary Clinton campaign with a Trump official.

He is expected to be arraigned in court today in Fort Lauderdale, Florida.