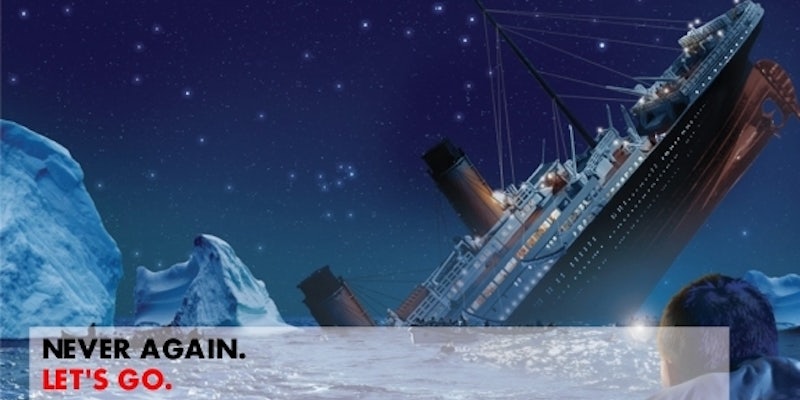 For the second time in two weeks, Greenpeace has framed Shell online.

For the second time in the last two weeks, Greenpeace has targeted Shell Oil Co. in order to weaken the drilling company’s reputation in the public eye.

The “Let’s Go!” social campaign, supposedly launched by Shell, is a little too unintentionally hilarious to be true:

“We at Shell want everyone to feel as ‘pumped’ as we do about freeing much-needed Arctic resources. After all, the Arctic is the common heritage of all humanity, and what we do there matters to everyone.”

Participants took it from there, piling onto the campaign with the least flattering ads they can think of.

For example, one user pairs a provided photo of a fluffy arctic fox scampering through the snow with the text: “We’re making these extinct so you can drive an SUV.” The most hyperbolic image Greenpeace provides? A photo of the Titanic, sinking amidst a flotilla of icebergs, paired with the phrase, “Never again.”

Thousands of participants have created, shared, and voted on derisive ads for the “Let’s Go” campaign. It’s unclear whether most users realize it’s a fake. Greenpeace New Zealand writes:

“For the past few months we’ve been working with the Yes Lab to design an entirely positive, enthusiastic campaign for Arctic drilling. We’re using Shell’s actual advertising slogan – Let’s Go – to tell it like it really is.”

This is the environmental organization’s second collaboration with the Yes Lab against Shell to go viral in recent weeks. Last week, the two groups staged a hilarious mishap at a supposed Shell private party where a replica of a tanker symbolically malfunctioned. Promoted by the Occupy movement, the video went viral before it was debunked.

Despite the debunking, the “Let’s Go” campaign may be a bigger success for Greenpeace than the tanker spill. When it comes to sharing potential, a funny image from a friend is worth dozens of stern warnings from an environmental agency.