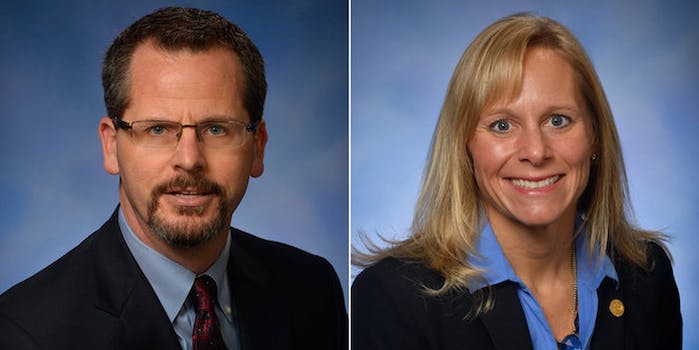 It's about to get weird.

It’s the weirdest news to come out of Detroit in a long time—and that’s saying something.

A scandal has erupted after leaked recordings show Michigan’s Rep. Todd Courser planned to launch a fake smear campaign against himself to cover up a real affair with another politician.

Courser and his secret muse, Rep. Cindy Gamrat, are both freshman lawmakers who rose through the ranks of the conservative Tea Party movement to become Republican congressional representatives for Michigan.

“Are you serious? What are you talking about? … It’s ridiculous. … Nobody’s going to believe any of that.”

According to the Detroit News, Courser claimed he and Gamrat received identical text messages on May 19 from an unidentified number. The texts insinuated knowledge of what now appears to be a long-standing affair between the two congresspeople.

At 10:30 that night, Courser called his then-aide Ben Graham to his office and asked him to “destroy me,” Graham told the Detroit News. Graham recorded the conversation and later handed over the recordings to the news site, which posted them online early Friday morning.

“I mean, what did you think would happen?’ asked Graham on the recording, in a conversation about Courser’s affair with Gamrat. Courser described his relationship with Gamrat, saying that her husband was already aware of the affair and was “working through it” with her.

After some tense discussion, Courser began to describe the option he apparently thought was a good idea: a fake, angry email that put Courser at the center of a gay prostitution scandal featuring “male-on-male, paid-for sex.”

Graham can be heard trying to negotiate with Courser: “Are you serious? What are you talking about? … It’s ridiculous. … Nobody’s going to believe any of that.”

“No, they’ll believe some of it,” Courser said, continuing with the smear campaign. “He’s a freak.”

“I’m not a homosexual,” Courser said in the recording. “Probably part of the problem [is] because they can’t—you know, I don’t do alcohol, I don’t do drugs. But they don’t know that. And anything that comes after, it’s a burn. And people go ‘I’m not listening to that, that’s bullshit! Who would do that to somebody? They’re attacking him.’ Work with me, Benjamin.”

Later Courser can be overheard saying that he needed to “inoculate the herd” against the inevitable uncovering of his relationship with Gamrat.

Later on the recording, the discussion turns to whether Courser’s enemies had video proof, photos, or audio of his affair with Gamrat. It’s clear that Courser felt his affair would be uncovered quickly, and that he had to take rapid action to cover it up.

Despite Courser’s pleas, Graham refused to circulate the fake smear email. He instead provided the Detroit News with the text messages between him and Courser about his refusal to participate. Soon afterwards, said Graham, he was confronted by Gamrat and Courser together and then fired from his job.

Gamrat’s aide, Keith Allard, was also fired. The former aides both spoke to Detroit News and said they effectively worked for both representatives and were both fired in relation to their knowledge of the affair and its subsequent cover-up.

The email was eventually circulated to Republican activists around Michigan, sent from a fake account attributed to “George Rathburn.”

On Friday, Michigan House Speaker Kevin Cotter called for an investigation, saying in a statement released on Friday that he plans to “review the matter and determine whether there was a violation of House rules or any evidence of illegal behavior.”

“We will not stand for any violation of House rules or law,” Cotter said, “and we will not let anyone’s actions tarnish this institution or take away from the work we do every day to improve the lives of the hard-working men and women of this great state.”