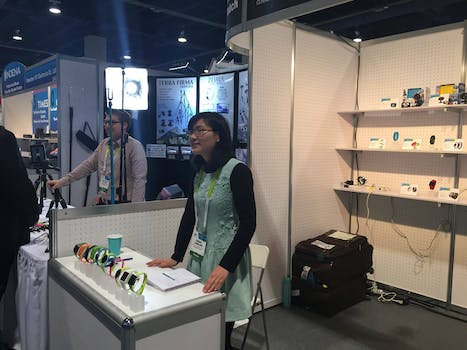 "This is like walking through an electronic flea market."

The back corner of South Hall of the Las Vegas Convention Center at CES is basically a home for patent and trademark infringement, a dark corner full of potential lawsuits. Fakes and nearly identical products (many from Chinese manufacturer Shenzhen, surprise) fill booths everywhere. Your neck gets sore from so many double-takes as you whip around to see a fake Oculus Rift or supposed iPhone Whatever. As one passerby remarked, “this is like walking through an electronic flea market.”

It’s the physical manifestation of the digital black market, and this year’s hottest knock-off was the Apple Watch.

While there was one unit that seemed to unilaterally grab the press’s attention, there are actually quite a few out there. The units from HiFit were notably similar-looking. Not only were the various fakes physically like the upcoming Apple Watch, they ran operating systems clearly trying to mimic iOS (though on seriously worse displays). Another impersonator called Cheng Fong has shown up at CES before, though with notably more original products.

These companies’ intentions seem obvious, but when asked about buying one of the units, though, the conversation is confusing.

“When are these on sale?”

“Oh… no.” Booth representative shakes her head, and is notably suspicious these inquiries. None of them would offer buying information either (though apparently you can buy them). The denials and caginess could be chalked up to language barriers, or to… who even knows, really?

One criticism of CES is that it is utterly meaningless. Sure, the booths are basically massive art installations, and you get to handle technology you may never be able to afford. But the excess of the show is what makes it inaccessible. And while hardware is not dead (in fact, it feels like it’s experiencing a Renaissance), the fact that some big names in technology sit the conference out does not go unnoticed. Chief among those big names is Apple.

Apple has notoriously sat out CES, and many (many, many) observations have been made about how one of the most important companies in technology’s own event (WWDC) is comparable to a conference that highlights everyone else, at much higher cost and flash.

The Cupertino giant may not have shown up to the conference, but its foreign knock-offs did in droves.