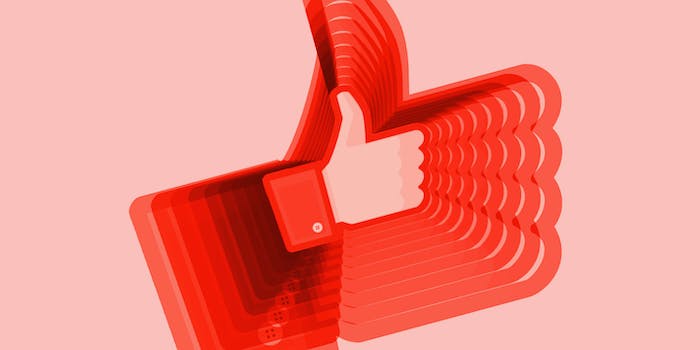 This algorithm knows your personality better than your friends

It uses all your Facebook likes to determine your personality.

These days, when you want to find out more about someone, the solution is almost automatic. You go to that person’s Facebook profile and take a quick (or perhaps extended) gander at that person’s life. At the end of your information expedition, you’ll have a better grasp of what that person is like in real life.

A new study published by researchers from the University of Cambridge suggests what we already recognize: Facebook knows everything there is to know about you—even more than actual people do.

The authors of the study, which was called “Computer-based personality judgments are more accurate than those made by humans,” asked over 86,000 people to complete a personality quiz that pinpointed key elements in their characters. Michal Kosinski, a computer scientist at Stanford University, and Youyou Wu, a social psychologist at the University of Cambridge’s Psychometrics Centre and a former Facebook intern, created the Facebook app myPersonality, which uses 100 questions to measure people’s “big five” personality traits.

Quiz results were then compared to participants’ Facebook activity. The result was that “computer personality judgments have higher external validity when predicting life outcomes such as substance use, political attitudes, and physical health; for some outcomes, they even outperform the self-rated personality scores.”

Among the team’s findings: Those who like The Daily Show, David Bowie, and Buddhism are associated with liberal and artistic openness, while loving Doctor Who, Wikipedia, and mathematics classified people as having shy and reserved extraversion. An interest in cycling suggests that you’re well-organized, while liking vampires makes you spontaneous.

If you want to give the personality assessment a whirl yourself, you can do so, provided that you already have numerous public Facebook likes to which your results can be compared.

The researchers also asked the participants’ closest acquaintances to judge them using a ten-question survey and analyzed previous studies concerning the accuracy of human personality judgment.

While knowing someone personally can help in assessing one’s personality, it doesn’t take a genius to recognize that computer intelligence can store and process more facts than an average human brain. Computerized data also remain free of prejudice or faulty recollection.

The team’s model needs only 10 Facebook likes to identify someone better than their work mate can. It only needs 70 likes to do better than a friend or roommate, 150 likes to overwhelm a family member, and 300 likes to out-know a husband or a wife.

Why are these findings important? The study, published in the journal Proceedings of the National Academy of Sciences, claims that relying on computer intelligence rather than human judgments can be beneficial in the fields of psychology, marketing, and privacy. It can also be useful in corporate hiring decisions, health care services, and education.

The new research comes from the same team that found that Facebook likes predict high intelligence in 2013.