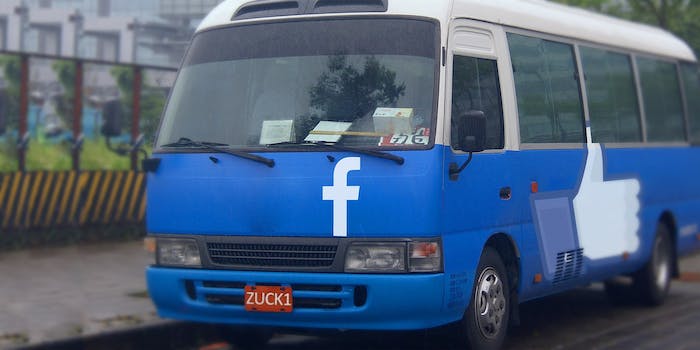 "The noblemen are your employees, and the servants are the bus drivers."

Claiming that they’re treated like “servants,” the drivers of Facebook’s fleet of shuttle buses are seeking to unionize in a push for better working conditions.

In Silicon Valley, the shuttle buses used to ferry the highly-paid employees of tech corporations to and from work have become a contentious issue in recent years, viewed by many as symbolic of the encroaching gentrification that is pushing up rent and driving families out of neighbourhoods. Protests have resulted, ranging from satirical ditties to outright attacks on the buses.

As it happens, even the bus drivers themselves aren’t happy with their lot—despite helping ferry some of the the most highly-paid workers in the country to and from work every day, their own wages and hours leave a lot to be desired, they claim.

Facebook’s drivers’ shifts are split into two—the morning and the evening run—but the cost of living means for most its not feasible to return home in between. Instead, the New York Times reports, they’re often forced to sleep in their cars, or “hang out in Facebook’s cafeteria.” This results in what is effectively 15 hour days, starting at 6am (or earlier) and not finishing until around 9pm.

An official representing Facebook’s shuttle bus drivers has now written directly to Mark Zuckerberg, asking the social network founder to “encourage Loop Transportation, the company that is providing transportation services to Facebook, to recognize the Union of the employee’s choice.”

The letter is sharply critical of the disparity in wages and living conditions between Facebook’s own employees and those of its drivers. “These drivers can’t afford to support a family, send their children to school, or least of all, afford to even dream of buying a house anywhere near where they work.”

“This is reminiscent of a time when noblemen were driven around in their coaches by their servants,” it continues. “Frankly, little has changed; except the noblemen are your employees, and the servants are the bus drivers who carry them back and forth each day.”

Shuttle bus drivers typically make between $18 and $20 an hour.

Loop’s President, Jeff Leonoudakis, told the New York Times that he believes “we take really good care of our drivers,” and that they “pay overtime, which most of our competitors do not pay.”

“In keeping with the fact that we provide this high level of wages and benefits to our drivers, Leonoudakis argues, “I don’t think the union is necessary in this case.”

However, Leonoudakis admitted, he did not have an answer to the issue of split-shifts. “I don’t think anybody in the industry does.”