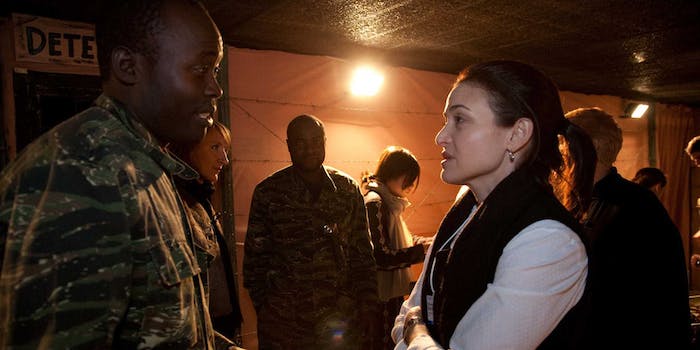 According to a report published today in the Daily Mail (read: take this story with a grain of salt), Facebook Chief Operating Officer Sheryl Sandberg is planning to secure one of California’s two U.S. Senate seats in 2016, the same year that Hillary Clinton is expected to run for President.

However, two sources close to Sandberg’s “inner circle” give conflicting accounts of the billionaire COO’s speculated Senate run: One declares the bid to be a near certainty, while the other says that “it is 100 percent untrue.”

Purportedly, Sandberg will challenge incumbent Democratic Sen. Barbara Boxer for her seat when Boxer is up for re-election in 2016. California’s other senator, Dianne Feinstein, will hold on to her seat until 2018; but, per the Daily Mail‘s conjecture, Sandberg is unlikely to wait that long.

At the World Economic Forum in Davos, Switzerland this January, a BBC news moderator asked Sandberg, “Is politics for you?” She replied:

“Not for me. I just have a wholesale agreement that we need more women in politics.”

Sandberg previously shot down rumors of a political return last October, when she told the audience at the Fortune Most Powerful Women Summit in Washington D.C. that, despite the constant speculation of whether she would leave Facebook to run for office, she has no plans to do so.

Before joining the elite team of Facebook CEO Mark Zuckerberg in 2008, Sandberg was the Vice President of Global Online Sales and Operations at Google.

From 1996 to 2000, Sandberg served as Chief of Staff to United States Secretary of the Treasury Larry Summers under President Bill Clinton.

In 2013, Sandberg published Lean In: Women, Work and the Will to Lead, which topped the bestseller lists of Amazon and the New York Times. Sandberg described the book as “a sort-of feminist manifesto.”