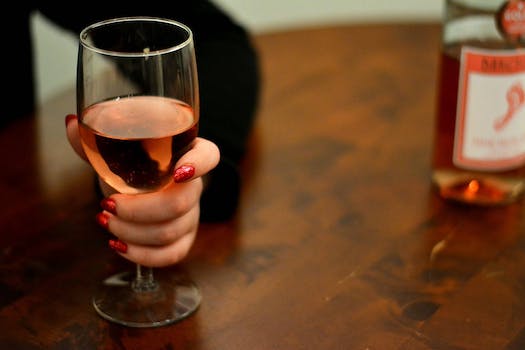 Don’t get scammed by this wine gift exchange on Facebook

If your friend just invited you to join a wine gift exchange this holiday season, it could be scam.

The holidays are a magical time. For some, that means selfless acts of good will. For others, that means downing copious amounts of wine. And for those who enjoy both of these noble pastimes, there’s a holiday wine gift exchange going around on Facebook. Unfortunately, it could be a scam. 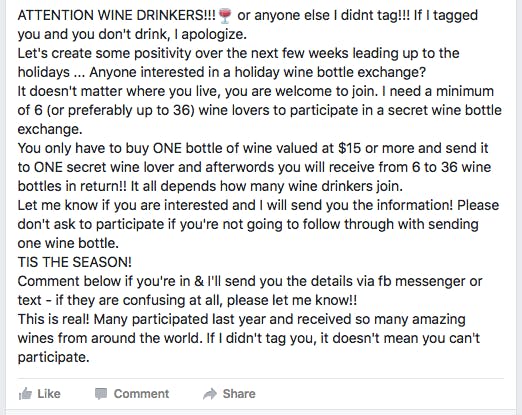 Unlike New Zealand’s Twitter-coordinated Secret Santa program, which assigns each participant wa randomly selected gift recipient, this Facebook-based gift exchange appears to be a pyramid scheme. How would you provide one bottle of wine and get six to 36 in return?

There’s also a second similar scam circulating, CBS News reports, called the “Secret Sister Gift Exchange.” The Better Business Bureau has already issued a warning about this pyramid scheme, which asks participants to send in one $10 gift, and promises up to 36 in return.

Participating in this type of activity could even have legal ramifications: “Gift chains like this are illegal and participants could be subject to penalties for mail fraud,” the BBB notes in a release on its website. It could also be potentially dangerous to your personal security, since to participate, you’ve got to share information such as your home address.

If you want to do a holiday gift exchange, your best bet is to take it off Facebook and coordinate it in person. You’re probably more likely to get something you’d enjoy out of the process, and far less likely to get burned.