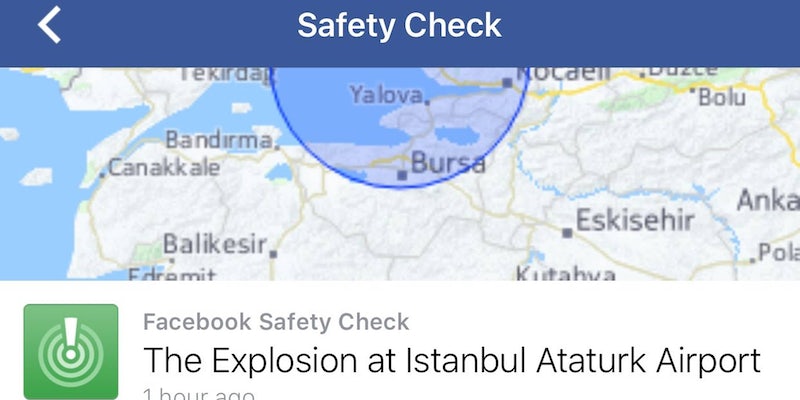 A deadly bombing in Turkey‘s Anaturk airport Tuesday night lead to Facebook activating Safety Check feature in the country for the very first time. But some Facebook users in Turkey were unable to sign on.

The Turkish government restricted access to Facebook, Twitter, and other social media channels only a few hours after the attack that killed at least 41 in Istanbul’s main airport. Turkish Prime Minister Binali Yıldırım issued a gag order on social and print media, citing “national security and public order.”

Facebook’s Safety Check still launched in time for many users in Turkey to use the feature. “I saw most of my friends in Istanbul immediately use the feature,” Yusuf Omar, a social media editor from Hindustan Times, told the Daily Dot.

But it’s likely that many users in Turkey were unable to access the feature due to the government’s prompt social media blackout. Tuesday night’s airport attacks occurred around 10pm local time. According to Vocativ, by 11:15pm, Turkey’s Supreme Board of Radio and Television posted an announcement that banned the “sharing of any visuals of the moment of explosion, blast scene, emergency work, of the wounded and dead, or any ‘exaggerated narrative’ about the scene.” An Istanbul court ruled that the ban applied to print and social media an hour later.

Shortly after 1am local time, press freedom organization Turkey Blocks reported that both Facebook and Twitter were blocked.

Confirmed: Twitter and Facebook blocked in #Turkey by throttling at 1:06AM after #Ataturk #Istanbul airport attacks pic.twitter.com/LoEblca3G9

This isn’t the first time the Turkish government restricted the spread of information among citizens following a terrorist attack. More recently, the Turkish government imposed a local media gag order and blocked Facebook and Twitter following a March car explosion in Ankara that killed 18. As Alp Toker of Turkey Blocks and TVHI, a Turkish news organization told CTV, the airport incident is the tenth incident in recent times after which the government responded with a media blackout.

Turkey’s media blackout “does more harm than good, today Facebook, Twitter and Youtube were blocked about two hours after the attack and have been since, so it’s really a blackout, adding confusion and making it more of a terror incident in a way,” Toker told CTV.