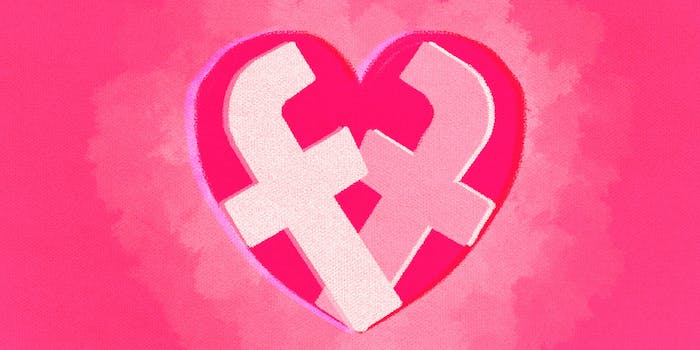 Study reveals that couples who ‘Facebook together, stay together’

Broadcast your love and it will last.

A recent study of college-aged couples discovered that those cloyingly Facebook-happy couples might actually be onto something.

On Facebook, “self-presentational cues”—the actions that signal a couple is together (relationship status, tagging and sharing photos, and commenting on walls or status updates)—increased the commitment a couple had toward one another. These social gestures improved the chances that a couple would still be together after six months.

“People tend to internalize what they say about themselves in public, and we were interested applying this to relationships, and to the idea that if you declare your commitment publicly, you might perceive yourself as more committed to that partner,” said Dr. Catalina Toma, an assistant professor at the University of Wisconsin-Madison, and a coauthor of the paper “The Couple Who Facebooks Together, Stays Together: Facebook Self-Presentation and Relationship Longevity Among College-Aged Dating Couples,” published this month in the journal Cyberpsychology, Behavior,
and Social Networking.

An important caveat to mention, however, is the study focused on the longevity of the relationship—not its the health or perceived success. And because researchers didn’t have access to what content was shared on Facebook, there was no way to determine whether or not it was positive or negative. Researchers tested the interactions between couples using a survey and Facebook’s “friendship activity” feature at the beginning of the study, then six months later.

Most people present themselves to others in a way they want to be perceived, thus affecting how they view themselves. When broadcasting your love for your boyfriend or girlfriend to friends and family on Facebook, you are more likely to have a stronger commitment that matches the intensity of what you’re sharing with friends. Facebook is a large, rather public audience, and whenever people post about a significant other, the social feedback tends to be positive. Toma’s paper, which documented the results of the 180-person study, described this theory:

Consistent with public commitment theory, these publicly posted cues likely induced participants to perceive themselves as part of a romantic unit, thus cementing the relationship.

“If you present yourself as part of a couple through these displays on Facebook, you’re likely to be more committed to your partner, and for the relationship to last longer,” Toma told the Daily Dot. “I like to make an analogy to weddings… It’s the same concept—you bring together the important people in your life and you make public declarations of love in front of them. That’s psychologically meaningful because you start to see yourself from the imagined perspective of others.”

Navigating social media in relationships can be a challenge, and it inserts an additional layer of interpersonal communication and raises all sorts of questions about what is perceived to be normal behavior.

When are people supposed to become “Facebook official“? Am I posting too many photos on Instagram, while he isn’t posting any? Am I really having this conversation in my head right now?  Interestingly, a 2014 study suggests that people who felt insecure in their relationships posted more relationship-related content to Facebook.

“Going ‘Facebook official,’ or declaring your relationship on Facebook, is one really important milestone that people have to negotiate,” Toma said. “It’s often times a cause of tension or something that needs to be resolved. Facebook creates new challenges for couples in a way, but also new opportunities.”

Turns out, social media can be an extension of our real life social lives—just as we craved the approval of our mates from our friends and family for centuries without mobile apps, we now also want social validation on a grander scale, from friends across social networks. It’s perfectly okay, and potentially healthy for your relationship, to tag and share that photo of you and your partner at a picnic.

Toma’s research also asked another question: Do people with more friends and interests in common also have stronger relationships?

Nope. Data showed that if couples had more mutual friends in common, it negatively impacted the commitment to the relationship. Researchers attributed that to what amounts to basically a numbers game. More shared friends mean a greater social circle, and a higher likelihood of there being more romantic partners to choose from.

Another negative indicator that Toma described as “puzzling” was how many times a partner posted on a participant’s wall. Participants interpreted their own actions as neediness, while their posts on partner’s walls proved to be indicators of commitment.

Unfortunately for those of us struggling with how to balance social media and real-life relationships, Toma’s study doesn’t demystify everything. The tricky business of navigating Facebook as a pair is still on us for now.