Facebook will use VR to become our only reality

It's all starting to make sense.

In blue envelopes hidden underneath our seats at Facebook’s F8 developer conference were a handful of paper scraps, each one a perception puzzle that was meant to illustrate the intricacies and optical illusions our brains understand to be reality.

On the cover, a somewhat ominous statement: “All reality is virtual.”

Jeremy Bailenson, founder of Stanford’s Virtual Human Interaction Lab, which seeks to understand how people communicate and interact through virtual worlds, is credited with the quote. The sentiment was an obvious choice for Facebook to print on the front of an envelope beneath an audience prepared to hear its plans for Oculus. We’re all anxious to figure out what the mysterious endgame to the acquisition will look like.

But that’s not what happened today. Instead, the audience was treated to a lecture from Michael Abrash, Oculus’s chief scientist and The Matrix enthusiast, who sought to teach the audience why virtual reality is simply a manufactured perception, and what we perceive to be reality, often is a convoluted mess of misfired electric signals going to the brain.

“What is real?” Abrash began. “How do you define real?” 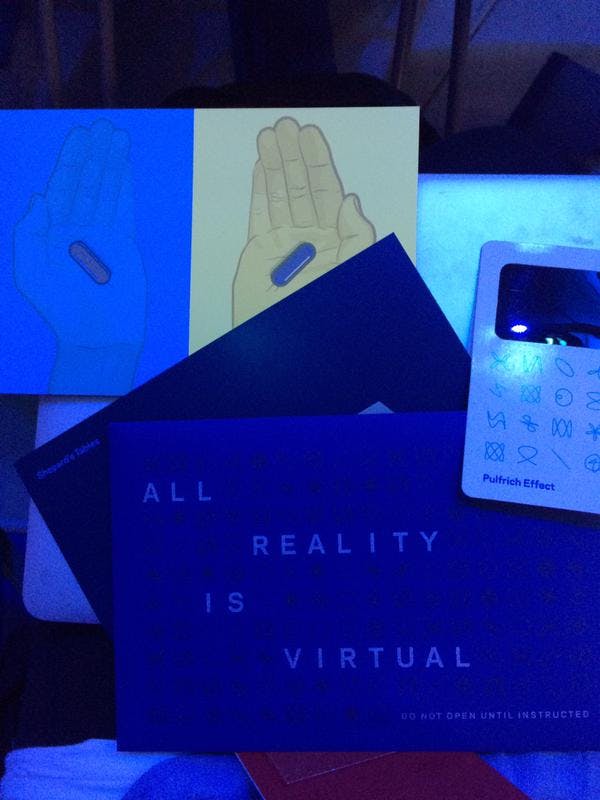 Abrash said that his fascination with virtual reality found its roots in science fiction, and regularly referenced The Matrix throughout the talk.

“To paraphrase Morpheus,” Abrash said, referencing one of the movie’s main characters, “some rules can be bent, others can be broken.”

There are no rules in virtual reality as we know it, yet. In fact, just a few short years ago it was still the stuff of science fiction and research laboratories, until Oculus came up with a way to strap a huge device over your eyeballs and fully immerse you entirely in another environment. And yet, there’s still some confusion on how, exactly, such technology fits into Facebook’s vision. Are we really just going to throw on a headset and stare at a giant, engulfing News Feed?

But now, things are at least a little clearer: Facebook doesn’t just want to manufacture reality, it wants to be your reality.

“Facebook used to be this one blue app on your phone, and now Facebook is a family of apps,” CEO Mark Zuckerberg said on stage at F8 on Wednesday.

The company’s vision goes beyond apps, and attendees of F8 got a peek at what Facebook is working on beyond our mobile devices. The company’s ideas regularly leak out bit by bit: creating artificial intelligence tests to teach computers how to think like humans, building drones that power Internet in developing countries, and releasing an entire on-ramp for the Internet in parts of the world that don’t have it.

But to see it on stage in a comprehensive presentation from Facebook’s chief technology officer Mike Schroepfer, followed by Abrash, it doesn’t look like the company is creating puzzle pieces scattered about on different parts of the Web. It’s building the Web. And the technologies of the future that will power it.

Facebook’s tentacles will touch every bit of our lives and how we communicate. On our News Feeds, immersive videos will take us to different worlds where our friends are hanging out. In games, Oculus will put us in the front seat of a spaceship and catapult us into different worlds. And across the planet, Facebook will be beaming the Internet down from giant, unmanned aerial vehicles with the wingspan of a 737 airplane.

To hear executives talk about it, it seems inspiring. It’s as if Facebook is officially in the moonshots competition against Google and Apple and other tech giants manufacturing the hardware that will eventually be in our pockets and on our faces and in our skies.

But then you hear phrases like “building services at planetary scale,” like Schroepfer stressed during his keynote, and it serves as a reminder that Facebook is inserting itself into every aspect of our lives, in every part of the planet.

Facebook has manipulated our perception of reality since photo tagging and FOMO to over-edited Instagram images. Now Facebook wants to jump off the screen and put itself literally in our faces, bringing its massive expansion of services with it.

As we innocently popped card stock table tops out of the envelopes and compared them to one another in a mind-bending observation of how our brain perceives things, Facebook was creating its own optical illusion.