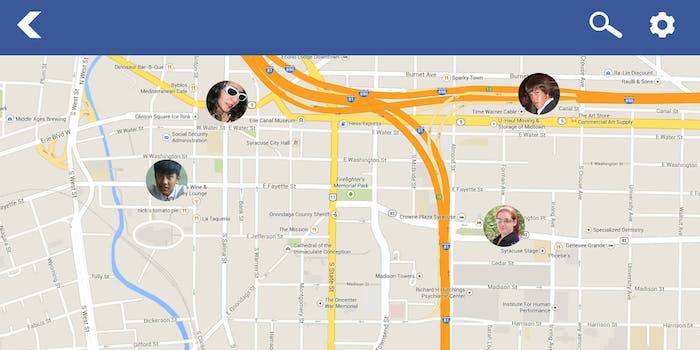 Will you opt-in to letting your Facebook friends know when you’re in the neighborhood?

Today, Facebook is rolling out a mobile feature called “Nearby Friends.” For people who turn it on, Facebook will provide a list of friends (who also have the feature turned on) who are in the same neighborhood or city.

It starts out giving approximate locations, so if I turn it on, all my friends in the area won’t be able to follow my exact movements. The feature lets you message the friends who turn up on the Nearby list. If you want to tell your friend exactly where you are, you can send a message with a more precise location in the chat. The feature is opt-in, which means you have to turn it on to use it. It is off by default. And you may not see it yet, since the roll-out is happening slowly with cities in California. The feature will only appear for U.S. users right now. “Nearby Friends” shares DNA with location-based friend finder apps like Glancee, which Facebook bought in 2012. Glancee and its main competitor, Highlight, worked using “ambient location” to help people meet up. The apps used GPS signals to alert users when people with similar interests were in the area; they were supposed to start friendships and help communities mingle. Although both apps did well at SXSW in 2012, neither hit it big, and since Facebook acquired Glancee, people have wondered whether the company had location-based plans in the works, or whether it was a dead-end acqui-hire.

It turns out former Glancee leader Andrea Vaccari hasn’t been idly spinning his wheels at Facebook: He’s been working on this “Nearby Friends” feature, and he wrote today’s blog post announcing the feature.

Vaccari spoke to TechCrunch’s Josh Constine about the privacy implications of the app, which is sure to alarm Facebook users wary of accidentally sharing too much information. Vaccari believes the company built enough security safeguards in. “The way the product is built is safe by default. Location is not precise by default. We want you to know there’s an opportunity to meet, not where [your friends] are,” he told Constine.

Facebook’s privacy reassurances are best taken with a grain of salt, but in this case, Vaccari is correctly speaking with confidence. Unlike other information-sharing features on Facebook, Nearby Friends gives users control over how much detail they share about their location, who they share it with, and when they share it. There’s always a chance a user could leave the feature on and set to public, of course. But if you aren’t outraged over Highlight, Sonar, and other third-party location-based apps, there’s no need to fret over this optional feature.

Nearby Friends has the potential to be genuinely useful. Vaccari outlined some ways Facebook anticipated users finding it helpful: “When Nearby Friends is on, you can see when your friends are traveling if they’re also using this feature and sharing with you. You’ll be able to see the city or neighborhood they are in, including on their profile. When you see a friend visiting a place you’ve been, it’s the perfect opportunity to send a recommendation for a great restaurant,” he wrote. Nearby Friends could be a convenient way to keep tabs on groups of people at music festivals, conferences like SXSW, games, and other crowded, sprawling events. If a goup of friends decides to turn it on beforehand, they’ll have a simple way to share their location even if they can’t find a good landmark to reference.

It shouldn’t come as a surprise that Facebook decided to finally make use of its Glancee purchase, and this is one of the company’s strongest new features for its main product in some time. The decision to put the feature in the main Facebook app is surprising. Facebook just gutted chat from its main mobile app in an effort to push users onto Messenger, its standalone messaging app. And Mark Zuckerberg has been clear about his intentions to dismantle Facebook’s core mobile app and build up a roster of diverse standalone mobile apps as part of a new mobile strategy. “Nearby Friends” seems strong enough to port out into a separate app. The Daily Dot asked Facebook if the company had considered launching the feature as a standalone, but we have not received a comment as of publishing the story.