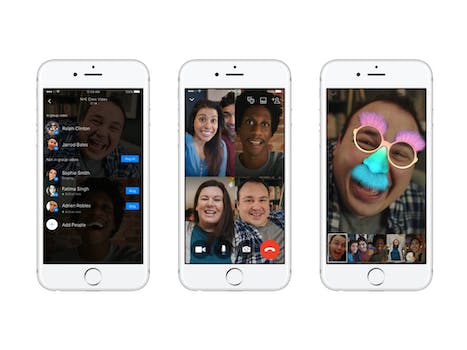 Facebook is taking on the app Houseparty with its latest Messenger updates.

Facebook Messenger just got one step closer to world messaging domination. Beginning today, the app is adding its most requested feature: group video chats. You can now video chat with up to six friends, while 50 more can tag along via audio.

To start a video chat, you first need to download the latest version of Messenger. Then, head to a new or existing group messaging thread. Tap the video icon in the upper right to start a chat, and everyone else in the thread will be notified. If a friend isn’t responding to the video chat request, you can ring them individually to better grab their attention. Once in the chat, you can also use a Snapchat-style selfie mask to liven up your appearance.

Messenger’s latest feature comes not long after the launch (and growing popularity) of video chat app Houseparty. Houseparty, made by the same team that built live-streaming app Meerkat, lets up to eight friends or acquaintances video chat with one another at the same time. It’s got a growing fanbase among teens and college students. With Facebook’s similar video chatting capability in Messenger, its hoping to capitalize on that momentum—particularly ahead of the holidays, when friends and family may opt to video chat if they can’t be together in person.

With Messenger’s video chatting, when you’ve got four people or fewer, each person’s video feed takes up a large section of the screen. More than that (up to six), and the interface switches so the speaker takes up the majority of the screen, while the other video callers appear as smaller thumbnails. If you’re the seventh (or later) friend to join a call, while you’ll be able to view the video feed, you’ll be audio only.

Group video chatting is available in the Messenger Android and iOS apps, and on the desktop.