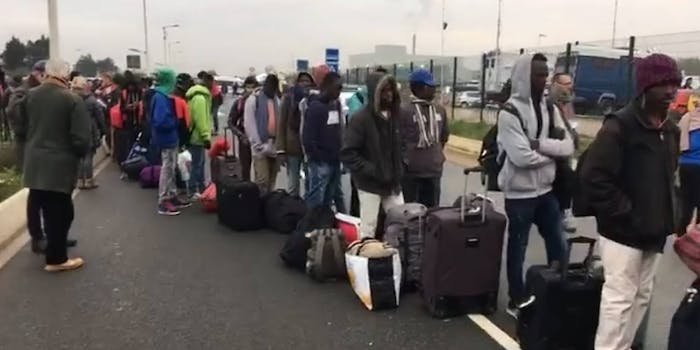 Over a thousand French police have now started to clear the migrant camp at Calais, also known as the ‘Jungle,’ and the media have been broadcasting events live on Facebook.

The camp, which is right beside the port of Calais and is close to the Eurotunnel, started in 2002 and is home to over 8,000 migrants and refugees hoping to enter Britain in order to start a new life.

The population of the camp surged last year as more than a million migrants arrived in Europe from Syria. However, French authorities plan to begin demolishing the encampment on Tuesday.

Despite initial clashes with riot police at the weekend, Monday’s eviction has been peaceful so far. When the operation began this morning, mainstream media outlets streamed footage of the queuing migrants as they awaited transport out of the camp to one of 450 refugee centers across France.

The Telegraph and Russia Today were both on the ground early this morning via Facebook Live and the broadcasts are already receiving a mixed reaction.

One despondent Twitter user reflected that “reality has become so much darker than Black Mirror” in response to the hateful commentary accompanying one Calais stream.

It’s the second time in a week that the use of the Facebook Live feature as a journalistic tool has drawn widespread fire online, as users debate its suitability.

Now you can watch the live dismantlement of a refugee camp to a stream of Nazi commentary from the comfort of your own phone #Calais pic.twitter.com/Jj75xYE7LP

Al Jazeera and the U.K.’s Channel 4 shared a live broadcast from the battle for Mosul last Tuesday, and, while few can question the impact of live access, the pixelated warzone landscape sprinkled with emoticons and ‘likes’ made many feel uncomfortable.

The negative reaction even provoked Channel 4 digital editor Jon Laurence to defend the integrity of his decision to broadcast to the Guardian: “We apply the same editorial standards to Facebook Lives that we do to our award-winning program, and that means ensuring that they are effectively supervised at all times; this is the case with every new platform or format with which we engage.”

Still, as the tool is deployed to the journalistic frontline once again, it appears that not everyone is convinced.