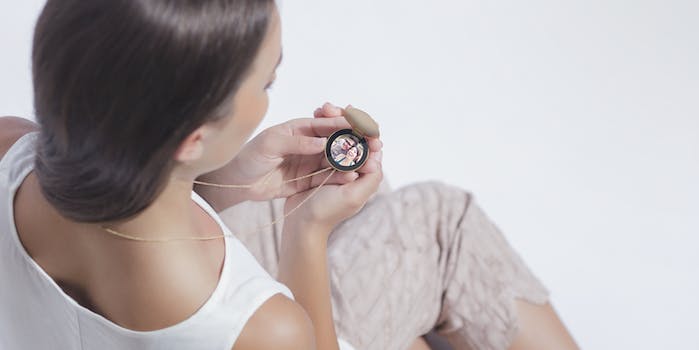 Remember the locket your BFF got you from Claire's in seventh grade? Purple is like that, but smarter.

There’s a trend of techies capitalizing on millennial nostalgia by taking beloved analog items and making them digital. Polaroid, for instance, took the retro Instagram logo and turned it into a digital camera with the Socialmatic. Now, Jennifer Darmour of the design consultancy firm Artefact is doing with jewelry what Polaroid did with cameras by creating the prototype for Purple, a necklace that looks like an old-school locket but stores your digital photos. 
Purple users select a group of contacts via the Purple app. The Bluetooth-enabled locket pulls up those friends’ photos from Facebook, Instagram, and SMS and displays them on the locket’s circular screen, which also gives you the option to like or share the photo, as it would on Facebook or Instagram.

When a friend posts a new photo to their Facebook or Instagram, the screen will glow, and a light seep out from the locket’s lid to alert the owner that a new photo has arrived. If you want to hold onto the photo and look at it later, you can save it to your permanent album of “keepsakes.”

It’s a clever idea, and the locket itself has genuine millennial nostalgia value: Unlike most wearables, which bear little resemblance to the accessory they’re supposed to emulate, Purple actually does Iook like any other locket you’d find at an accessories kiosk at a mall. But given how skeptical most people are of the wearables trend, what makes Darmour think that women will be more likely to wear Purple than, say, Opening Ceremony’s new smart bracelet collaboration with Intel, or Tory Burch for Fitbit?

The answer, says Darmour, lies in Purple’s unique and specific functionality. Rather than offering a million different features, as wearables like the Apple Watch or Fitbit do, Purple serves one chief function: To store the photos of the people that you’re closest to, which existing social networks like Facebook and Instagram don’t do on their own. “It’s not about collecting 500 friends,” Darmour told Wired, “but finding an experience that can enrich the core people you care about, no matter where they are.”