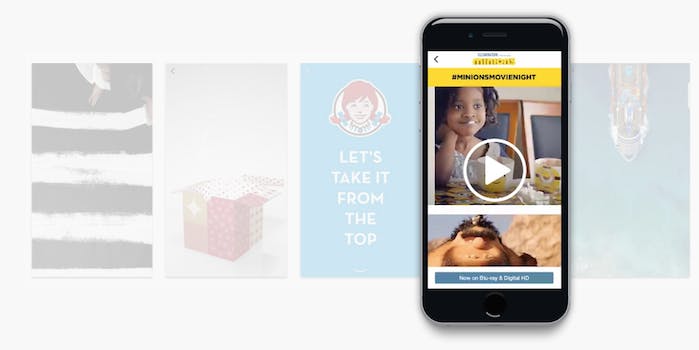 Full-screen ads will soon appear right in your Facebook app, thanks to a new feature for businesses that makes ads more interactive. Facebook recently launched Canvas, a tool for advertisers to make giant ads that pop up in your timeline when you click on a sponsored post.

Canvas is an attempt to make ads more engaging while preventing opening ads in a new window, which can take forever to load and grate on the patience of a potentially interested user. Facebook says Canvas ads load up to 10 times faster than mobile Web ads.

With Canvas, businesses can make ads people can interact with—through tapping, scrolling, or viewing content—and then pop right back to Facebook.

When you tap on an ad using Canvas, an ad will takeover your screen directly in the Facebook app. You won’t have to wait to be pushed into another mobile site to view what the advertiser is forcing on your eyeballs.

Canvas ads won’t cost more than what advertisers already pay for Facebook ads, and require no coding. Facebook walks businesses step-by-step through the process; adding photos, GIFs, or other interactive content is simple. According to TechCrunch, Facebook is considering whether or not similar ads would work in Instagram.

The full-screen takeover won’t pop up automatically, so the ads shouldn’t be too invasive. For now, you’ll only see them if you tap on an ad that you’re interested in, making the experience easy to avoid.