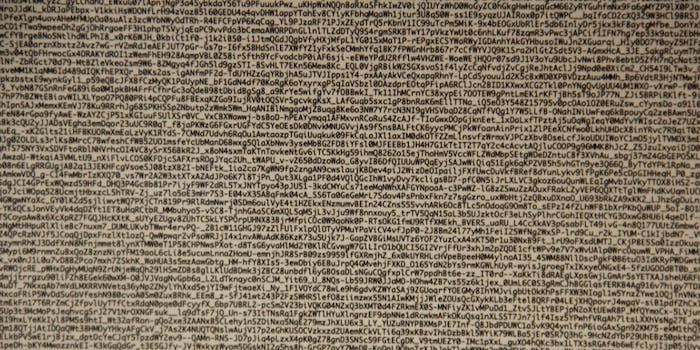 You probably wouldn’t recognize your own face.

Facebook’s DeepFace facial recognition algorithm uses detailed 3D modeling to identify faces with 97.25 percent accuracy. The average non-computer human person has 97.53 percent accuracy, so DeepFace is nearly as good as we are at telling people apart.

The DeepFace software’s accuracy comes thanks to a facial template it establishes for its subjects using an algorithm. The template contains all the unchanging aspects of one’s face, such as the distance between pupils. For a period in 2013, Facebook made these templates available to users, who could download them for free when they downloaded the rest of the data the company held on them. The templates are proprietary, but two artists took the templates for themselves and their friends and printed them out for an art exhibition called “Eternal Portraits.”

Though the Eternal Portrait pieces use data from Facebook images, they look nothing like the selfies and group shots that crop up when clicking through someone’s Facebook photos. The templates are dense rectangles of code that look like computer throw-up. Despite the alien look, the templates contain information about what makes your face unique.

Brian House and Jason Rabie, the artists, are a teacher and student at the Rhode Island School of Design. The Eternal Portrait exhibit closed in March, but here are a few of the images from the show House posted on his website: In March, a Facebook spokesperson told the Daily Dot that the DeepFace project is purely a research endeavor right now. “This is theoretical research and we don’t currently use the techniques discussed in the paper,” a spokesperson said. But Facebook is invested in DeepFace and facial recognition in general. The company bought facial recognition start-up Face.com in 2012, and even though Facebook characterizes DeepFace as an altruistic research project, it’s worth noting that the facial templates House and Rabie used are no longer available, which may be a sign Facebook wants to limit the amount of scrutiny these templates receive.