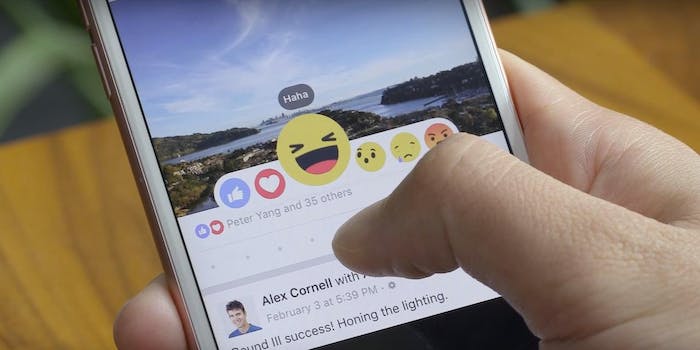 Get cooler Facebook emoji reactions with these custom Reaction Packs

React how you want.

Facebook expanded the “Like” button to a six-pack of emoji reactions last month. But maybe that’s enough enough for you. Or maybe emoji just aren’t your style. If that’s the case, you can turn those reactions into just about anything with Reaction Packs.

Reaction Packs, developed by Rodney Folz, swap out the standard Simpsons-colored emoji that currently populate the Reactions menu with, well, practically whatever you want.

Right now, there are nine packs available, including sets that turn the reaction faces into Donald Trump (if you prefer orange faces to yellow ones), Canadian Prime Minister Justin Trudeau, Morty from Rick and Morty, and various Pokémon.

Reaction Packs is a browser extension available for either Chrome or Firefox. Once you’ve installed it, head to the Reaction Packs site and choose the set of images you’d like to see. Then head over to Facebook and your chosen reactions should replace the default set.

If you have a set that you’d like to see but that isn’t yet available, you can create your own by following a simple set of guidelines. Once they’re published, anyone else can use them, too.