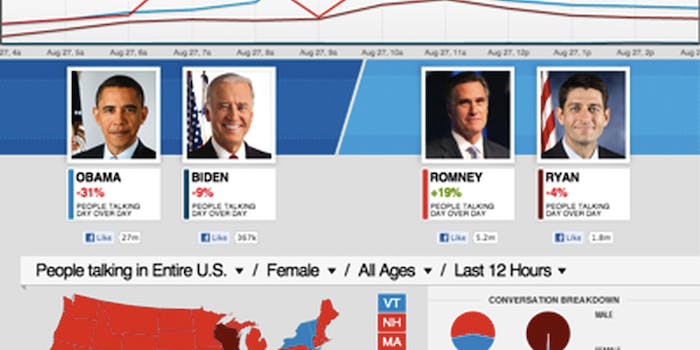 Facebook and CNN's new "Election Insights" tool tracks the level of Facebook conversation about the Obama and Romney by location, age and gender.

Facebook and CNN announced on Monday that the two companies had teamed up to release an unprecedented way to track information about the Presidential race on social media.

Facebook’s Election Insights tracker, hosted by CNN, is a follow up to Twitter’s Political Index released earlier this year. But unlike the latter, the Facebook tracker allows users to search for information by various categories, as well as look at the standings of Barack Obama and Mitt Romney’s running mates, Joe Biden and Paul Ryan. On the Facebook tracker, you can see how each candidate is doing in specific states, within certain age groups, and even by gender.

“Facebook-CNN Election Insights — found at CNN.com/FBinsights– displays dynamic, real-time charts and visualizations using Facebook Insights to gauge the volume of Facebook activity surrounding the election and candidates,” according to a press release from Facebook.

The press release also said that the new political tracker would be used by CNN throughout the election.

The information provided by the tracker is wildly interesting for people who enjoy the intersection of politics and social media. There are dozens of combinations in which to look at data. For example, among Facebook users 55 years and older, most are talking about the Republican ticket. The only states where the President gets more attention is Vermont and Hawaii. For those between the ages of 18 and 24, the President gets more mentions in every state, except Idaho, Wyoming, Utah and West Virginia.