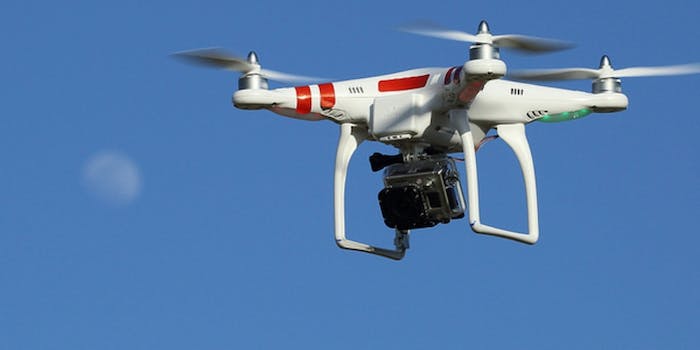 The FAA on Thursday brought us one step closer to a world in which flying robots drop off packages on our front doorstep, authorizing Amazon to begin limited tests of its drone delivery service.

Although the FAA is still working on an official commercial drone policy for American businesses, the federal aviation regulator gave special permission for the online retailer to begin testing Amazon Prime Air—provided the company meets a set of strict operating criteria.

Amazon’s drones can only fly during the daytime, and they must stay under 400 feet. Drone operators must be certified as private pilots, and either the pilot or a partner must maintain a visual line of sight with the remotely operated aircraft at all times. Finally, the drone must stay at least 500 feet away from anyone not involved with the testing at all times while it is in the air.

These rules mirror the general commercial drone-flight restrictions that the FAA imposed in February, as well as earlier rules it established for Hollywood film shoots. The FAA had already issued permits for nearly fifty other commercial drone-testing operations, but Amazon is easily the highest-profile company to get a permit.

The special authorization represents a significant win for Amazon, which was already testing drones indoors and overseas but could not do so in U.S. airspace. Amazon first announced its futuristic drone delivery service in 2013. Since then, it has been at the forefront of the business community’s push to establish clear commercial drone regulations.

Amazon can conduct limited testing under the FAA’s new rule, but as the Verge’s Ben Popper writes, the restrictions on testing prevent Amazon from creating a “scaleable commercial operation” for now.

Amazon was among the harshest critics of the draft rules that the FAA released last month.

“The FAA’s proposed rules for small [unmanned aircraft systems] could take one or two years to be adopted,” Paul Misener, Amazon’s vice president of global public policy, said at the time, “and, based on the proposal, even then those rules wouldn’t allow Prime Air to operate in the United States.”

“The FAA,” Misener added, “needs to begin and expeditiously complete the formal process to address the needs of our business, and ultimately our customers.”

Even the FAA’s provisional approval for Amazon has come under fire from critics like attorney Brendan Shulman, who has sued the agency multiple times over its drone policy. Schulman insists that the FAA’s failure to regulate swiftly and uniformly is hurting the industry.

“By insisting Amazon obtain an experimental airworthiness certificate, the FAA is treating drones the same as a Boeing 747 that’s operating for development or testing purposes,” Schulman told Forbes. “This approach is some progress for Amazon specifically, but it’s still limiting for innovating companies in general.”