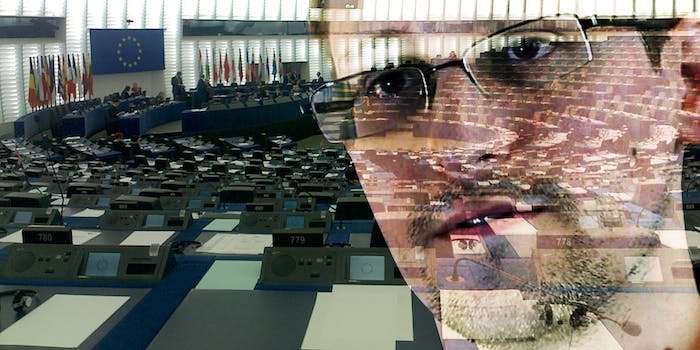 Six months of inquiry have finally paid off.

After six months of inquiry, the European Union Parliament has adopted a resolution against the National Security Agency’s habit of spying on Europeans. And it passed with an overwhelming majority: 544 votes to 78, with 60 members abstaining.

The resolution was buoyed by the agency’s most famous ex-employee, Edward Snowden, who in June fled the U.S. to leak scores of classified documents, some of which detail NSA programs to spy on European citizens and politicians. On Friday, Snowden submitted highly lauded testimony to the EU from Russia, where he’s staying in asylum.

“I am telling you that without getting out of my chair, I could have read the private communications of any member of this committee, as well as any ordinary citizen,” Snowden swore, claiming that the NSA actively lobbies European governments to relax their privacy laws to better help the agency’s surveillance.

As much as Snowden’s testimony provided publicity to the resolution, it’s not clear it made a significant impact, especially considering Snowden’s general popularity in the EU Parliament.

“I don’t think it brought about a major shift,” Sophie in ‘t Veld, MEP from the Netherlands, told the Daily Dot. “Most MEP (members of parliament) probably already made up their minds.”

“But it strengthened our argument. And I am sure Parliament will continue its work on the issue in the next term, and his statement will be extremely useful,” she added.

“The Snowden revelations gave us a chance to react,” announced Claude Moraes, the MEP in charge of the Civil Liberties committee, who had championed the resolution.

“I hope we will turn those reactions into something positive and lasting into the next mandate of this Parliament, a data protection bill of rights that we can all be proud of.”

The final text of the resolution has yet to be released to the public, but a spokesperson for the Civil Liberties committee told the Daily Dot that little had changed from the most recent draft text. As a resolution, the vote isn’t directly binding. But it could still threaten the U.S. where it hurts: In its pocketbook. The resolution directs Parliament to withhold signing the Transatlantic Trade and Investment Partnership (TTIP), which proponents argue would be worth hundreds of billions of dollars to both sides of the Atlantic, until the U.S. better respects Europeans’ digital privacy.

And unfortunately for the NSA, that privacy looks to be on the mend. The EU Parliament also adopted a Data Protection Reform Package Wednesday, mostly praised by privacy advocates, which would partially harmonize European privacy laws. That package now goes to the European Council, which is expected to form a position on the package in June.

Photo by Martin.Ehrenhauser remix by Jason Reed (CC BY 2.0)