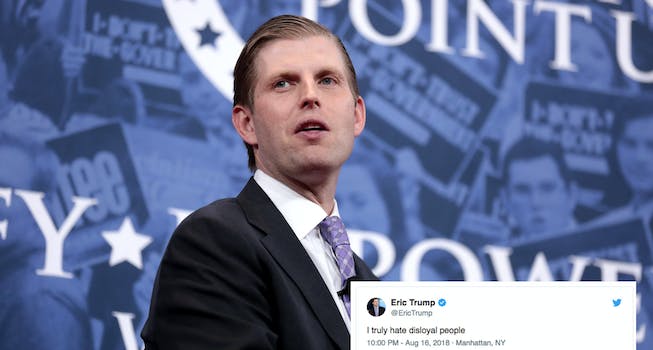 Last night, Omarosa Manigault-Newman released an audio tape purporting to show the president’s daughter-in-law Lara Trump offering her a do-nothing job on Donald Trump‘s 2020 campaign, in exchange for her silence over her time at the White House.

After the tape came out, Lara Trump issued a statement, calling Omarosa’s reveal a “betrayal.”

“I hope it’s all worth it for you, Omarosa, because some things you just can’t put a price on,” she said.

Her husband, Eric Trump, went one step not nearly as far, instead issuing a subtweet directed at the former reality TV star turned official in his father’s White House.

But lest you think that was the only way Eric Trump rushed to his wife’s defense, he also “liked” two tweets about the matter.

.@LaraLeaTrump is one of the nicest, hardest working people I’ve met in Trump world. @Omarosa is a lowlife who squandered the best opportunity anyone has ever given her. She will regret this later in life, there’s no question. #MAGA 🇺🇸

Latest tape from Omarosa shows how much Trump family cares about pocketbooks of our donors when @LaraLeaTrump warns about all campaign $$ coming from average Americans. Lara says the right thing protecting our donors and helping people understand we are powered by the people!

Your brother cheated on his wife. https://t.co/LM2J1mBy7y

Omarosa has promised many more tapes, so maybe Eric Trump will have a chance to do a stronger tweet next time.