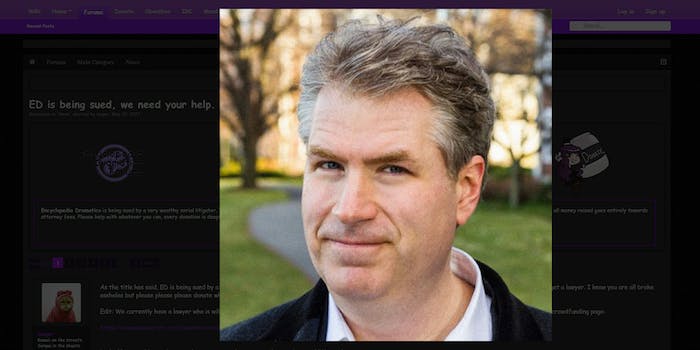 The lawsuit that could kill Encyclopedia Dramatica

The infamous depository of the internet's darkest secrets may have finally met its match.

Encyclopedia Dramatica, the notoriously provocative and politically incorrect chronicle of internet culture, is facing a lawsuit from an eccentric millionaire that threatens to bring the site to a crashing end.

Officially launched in December 2004, Encyclopedia Dramatica is infamous for its unapologetic celebration of troll culture and often explicitly offensive content. Its decade’s worth of crowdsourced, merciless satire includes coverage of events relevant to the internet and ignominious profiles of notable personalities.

In 2008, the wiki-style website published an article under its original .com domain about Jonathan Monsarrat, a millionaire game developer and entrepreneur whose first company, Turbine Entertainment Software, was behind the successful massively multiplayer online role-playing games Asheron’s Call and Lord of the Rings Online.

Monsarrat boasts a colorful résumé. He claims on LinkedIn that he invented the MMORPG genre, the roots of which date back to the 1970s, and to have worked for magician Penn Jillette, saved the failing Richard Dawkins Foundation, and set a Guinness World Record through a community art project. His present business venture is currently seeking funding for an augmented reality mobile game.

When first published in 2008, the article on him cited a 2003 story in which Monsarrat, then a 34-year-old Massachusetts Institute of Technology business graduate, had created a campus dating service called Match-Up, which he pitched as a “free service run by students.” After it was reported that he alone was behind the site and had allegedly been sorting through all the Match-Up profiles himself to access profile information on women, police issued him a warning.

The entry was updated again in February 2010 when a local Massachusetts newspaper, the Somerville Journal, reported that Monsarrat, 41 years old at the time, was arrested and charged with the distribution of alcohol to underage teenagers at a party he was hosting. (The charges were later dismissed.)

Monsarrat is now suing Encyclopedia Dramatica for alleged copyright infringement and seeking a total of $750,000 in damages.

The lawsuit document, provided to the Daily Dot, reveals that Monsarrat is claiming copyright infringement for the Encyclopedia Dramatica article’s quotation of some old forum posts and use of a photo of him dressed as a beaver. The image had been manipulated to include a Pedobear, a meme devised to mock internet users who express sexual interest in children. For each of the “literary and visual works,” Monsarrat wants $150,000 in damages.

The document lists several Encyclopedia Dramatica administrators as defendants in the case but only one by name: Brian Zaiger. In a conversation with the Daily Dot, Zaiger identified himself as an accountant who pays the bills for Encyclopedia Dramatica and keeps the site afloat. He criticized Monsarrat’s complaint as a frivolous lawsuit designed to chill protected free speech and debate—Monsarrat’s revenge for the article that drew attention to an allegedly seedy past.

By the time that Encyclopedia Dramatica’s .com-era site unexpectedly shut down in April 2011, the Monsarrat page was gone.

Encyclopedia Dramatica, however, to stay online, has switched top-level domain names several times—operating most recently under Sweden’s .se and Serbia’s .rs. On each occasion, administrators have uploaded thousands of articles from a backup archive.

During one such reboot, when Encyclopedia Dramatica moved to a new domain suffix, the DMCA’d Monsarrat article was reinstated. Zaiger claimed it was an oversight.

“The whole site was rebuilt via Google,” Zaiger told the Daily Dot. “When [Monsarrat’s] page was republished, it was in Google’s cache so we republished it. It was a mistake. If we had known the page was DMCA’d we wouldn’t have, although you cannot claim copyright on words written by someone else, we still would have kept it down out of courtesy.

“The page was removed as soon as we heard about the DMCA,” he continued. “Yet he filed the lawsuit anyways. … We are a 100 percent user-generated website and we comply with DMCA, even if it is false/bullshit.”

Internet archives corroborate Zaiger’s version of events. The .se era site relaunched under new management in late 2013, and cached screengrabs show that the Monsarrat page resurfaced sometime around Dec. 4, 2013. Only one other cached image exists, dated July 12, 2014. Although the site remains active, no cached images of the page exist after this date. This suggests that sometime around July 2014, the Monsarrat page was deleted. As further evidence, Zaiger provided recent screenshots of the page’s deleted status.

Given that the page in question has been deleted, Zaiger slammed the action as a SLAPP, short for a “strategic lawsuit against public participation,” or in his own words, a “copyright troll lawsuit.” SLAPP lawsuits attempt to silence opposition by burdening the defendant with the costs of mounting a legal defense.

Zaiger sought representation from the non-profit Electronic Freedom Foundation, but after consideration, the organization did not take the case. (Representatives for the organization told the Daily Dot it could not discuss the legal assistance request.)

So, Encyclopedia Dramatica supporters are currently crowdfunding a legal defense fund. The effort has raised less than $6,000 to date, but the campaign makes the stakes clear, describing the lawsuit as a petty act of revenge against a .com-era page.”

“If Monsarrat can shut down Encyclopedia Dramatica, any rich asshole with an ax to grind can shut any one of us down for reporting the facts and mocking someone,” the crowdfunding page states.

Zaiger sees a parallel between the current legal battle Encyclopedia Dramatica faces and a lawsuit Monsarrat filed in February 2013 against users of the blogging site LiveJournal. In the suit, Monsarrat tried to sue two named defendants, the author of a blog post about his 2010 arrest and the person who posted it to LiveJournal, as well as 100 John and Jane Does for defamation, intentional infliction of emotional distress, and civil conspiracy.

After refusing several settlement offers, both defense attorneys in the LiveJournal case issued letters to Monsarrat’s attorney that cited First Amendment protection for the news article and contended the defamation claim, court documents show. The defense also disputed a copyright infringement claim that was part of the suit, reasoning that the contested “photograph was not federally registered and [Monsarrat’s copyright] claim would therefore fail.” Shortly after, Monsarrat’s attorney filed a voluntary dismissal with prejudice—dropping the case entirely.

Zaiger is hoping for a similar outcome, but even still, as the only named defendant, the question will then become: at what cost?

While he is active in working to fight the lawsuit and save the controversial website he has contributed to for many years, he remains rather stoic about the affair.

“It is stressful, obviously. I mean, as the former proprietor of ED, I expected this would happen at some point,” Zaiger said. “Although, I thought it would be for a good and legal reason.”

Monsarrat did not respond to the Daily Dot’s multiple requests for comment.