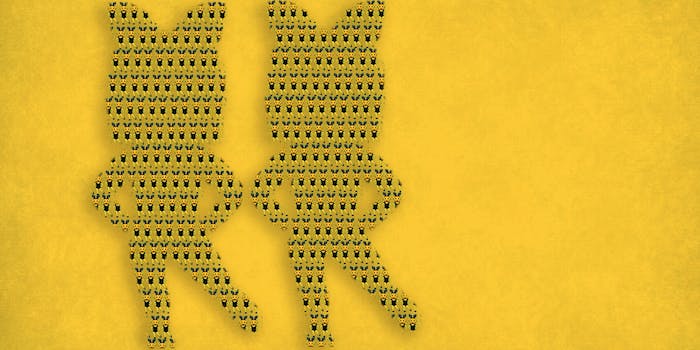 The emoji of two girls dancing is one of my favorites. It regularly appears under “frequently used,” and I send it to girlfriends all the time when planning a night out.

Apple rolled out an update to iOS on Wednesday that unveiled an entire set of new diverse emoji, adding new races and same-sex couples. They’ve also given some of the tiny cartoon characters a visible makeover, including my personal favorite, what I thought were two ballerinas dancing.

Turns out I’ve been sending my best friends emoji that were actually women wearing Playboy bunny ears this whole time. The duo is sporting black ears and a leotard, legs askew, emulating the old-school Playmates, a revelation first pointed out by Quartz. You can’t see behind them, but I imagine if you could, they would be wearing fluffy tails.

Had I paid a little more attention to the emoji keyboard on my Mac when my cursor hovered over that particular emoji anytime I sent it to a girlfriend, I would’ve noticed the name is “woman with bunny ears.” But with the latest update, Apple makes it much clearer that it’s not a headband sitting daintily on their heads which I originally thought, but rather ears.

It’s unclear why Apple decided that Playmates would be a beneficial emoji, when it took years to even welcome diverse emoji into the mix. Meanwhile, tacos, cheese, and broccoli are still missing from the list of emoji. (Though we hear those are coming soon.)

I’m not the only one who misinterpreted the dancers—and there are some hurt feelings.

The new emoji update turned the 2 dancing ballerinas into playboy bunny girls….that's awkward for a few ppl in my contacts.

We’ve reached out to Apple for an explanation into this strange graphic choice, and will update if we hear back. We’re all for Apple implementing risqué emoji that would make sexting even sexier, but for the company to feature Playmates, an outdated symbol of sexism, is a bit inappropriate.

Of course what really stings is that we’ve been unknowingly misusing this emoji all along.