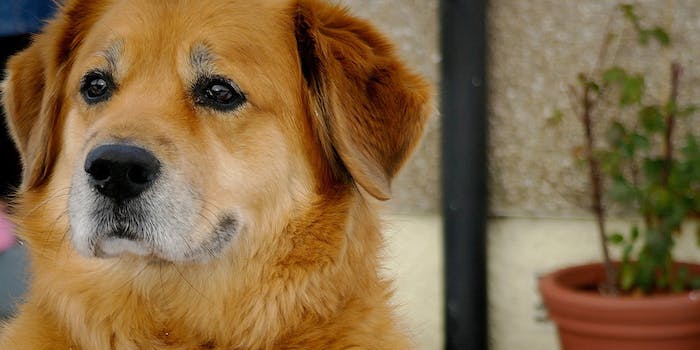 Get to know man's best friend.

Just like their caretakers, every dog has a story all its own. A newly launched startup called Embark aims to tell that tale to dog owners so they better understand the origin of their pet.

The company’s first product is a canine DNA test that goes a step beyond the typical breed-matching and vague origin stories of other pet heritage exams and delves deep into the health and lifestyle implications of each dog’s unique history.

“We will definitely be providing ancestry-related results that will help you tell the story of your dog,” Spencer Wells, co-founder and chief product officer of Embark, told the Daily Dot, but that simple explanation belies the complex aims of the project.

Prior to launching Embark, Wells created and ran the Genographic Project at National Geographic. The multiyear research initiative analyzed historical patterns in DNA to better understand the genetic roots of humans. Wells said the project “helped to launch the consumer genomics industry,” and was in part responsible for the consumer-targeted tests like 23andMe that provide ancestry and health information.

Embark will offer similar insights for dogs, requiring nothing more than a quick swab of dog slobber, and the information will go more than fur deep.

“Right up front, you’re getting results for over 100 genetic health conditions, over one dozen traits, the ancestry, the stuff that people have not even thought to ask about dogs,” said Adam Boyko, Embark’s chief science officer and brother of co-founder and CEO Ryan Boyko.

While the test gets into the origins of each dog, delving into its ancestral history “where they come from thousands of years ago and how did they get into your home,” according to Boyko, much of it is directed toward the future rather than the past.

The results are designed to be actionable, with information that isn’t just a handful of factoids about your pooch but things that may improve and even extend their life. Information revealed in the tests can help an owner perfect their dog’s diet, for instance, to address needs not specific to the breed but to that exact animal.

“Part of the need to push the research forward is that we know so much is inheritable in dogs, and we don’t yet know the genetic basis for it.”

Boyko said the data is designed “so you can discuss your results with your veterinarian and it can actually potentially change how your vet would treat certain conditions if they developed.”

On the surface, Embark’s DNA test offers great insight into our closest companions, but the company’s goals are much more ambitious than that. Each of the highly personalized results will serve as data points for the company as it amasses a more complete picture of the species as a whole.

“Part of the need to push the research forward is that we know so much is inheritable in dogs, and we don’t yet know the genetic basis for it. We really need to get those studies going,” Boyko explained.

As to what could be discovered, there’s a great deal on the table. “It runs the full gamut for things that are foremost in owners and breeders’ minds,” said Boyko, an assistant professor in charge of a dog genetics lab at Cornell University.

Everything from inheritable diseases and conditions like cancer, and heart disease to food and environmental allergies are being plotted and tracked. If the company can spot a genetic origins for these ailments, they may eventually be able to mitigate their impact on countless animals.

Earlier this year, Boyko’s lab completed the largest genetic study of canines to date, with over 4,200 dogs analyzed. The Embark model would increase that sample size exponentially by encouraging people to send the data to researchers directly. The plan, Boyko hopes, will “lead the way for getting the data needed to do the research.”

Beyond DNA collection, Embark is also hoping to include any information that a pet owner is willing to share about their canine companion. The company plans to send out follow-up surveys that will provide insight into animal behavior, and it will eventually open the process up to including health records from visits to the vet.

Lest people worry about the privacy of their pooch, Embark says it will treat the data with the same sort of care that would be applied to human health records.

“The scientific aspect of this will be done with anonymized data,” Boyko said. The ongoing research aspect of Embark is optional, and users can get the results of the DNA test and cut loose from the rest of the project. But Boyko believes most people will be more than happy to lend their pup’s information.

“I think most owners that we talk to, [the research] is actually one of the big, exciting things. Not only are they getting a comprehensive picture of their own dog’s genetic profile, but they’re also using this to advance dog science,” he said.

For humans and dogs alike, the journey of discovery will start later in the spring when Embark begins sales of its DNA test. The details are sparse still—somewhat ironic for a company that will be all about the details—as Embark finalizes testing. The price is expected to be in line with most consumer genetic tests, which generally range between $99 to $199.

Photo via Martin Astley/Flickr (CC BY 2.0) | Remix by Max Fleishman