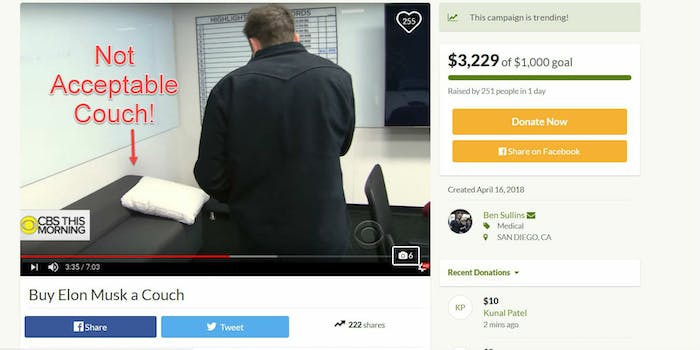 The campaign has more than tripled its goal.

For all the billions of dollars he put into SpaceX and Tesla, Elon Musk can’t seem to buy a decent sofa. Now the internet is stepping up with donations so the business magnate can get a more comfortable couch to sleep on.

More than 240 people have donated roughly $3,100 to a GoFundMe created to gift Musk a new sofa. The campaign has tripled its goal in just one day. The bizarre crowdfunding idea is a response to a CBS This Morning interview in which Musk admitted to sleeping in the conference room at the Fremont Tesla factory where the company is struggling to build enough Model 3s.

“Last time I was here, I slept literally on the floor because the couch was too narrow,” Musk readily admitted.

CBS co-host Gayle King, who was touring the facility, tested the couch and came away unimpressed, “And Elon, I have to say, it’s not even a comfortable couch,” she said. Musk agreed, “No, it’s a terrible—this is not a good couch.”

You can see the sad excuse for a sofa at the 3:30 mark in the video below.

Ben Sullins, a Tesla enthusiast with his own YouTube channel on sustainable tech, explained in a video that if Musk never accepts the donation, the money will go to a charity, ideally one that encourages electric vehicle adoption.

“Hopefully by helping Elon in this way, we can also help ourselves as Tesla enthusiasts by giving him a better rest, which in turn leads to better production, who knows?” Sullins joked.

Electric car enthusiasts will be crossing their fingers that’s the case. Tesla announced yesterday it paused production at its Model 3 production plans to improve (or perhaps reduce) automation.