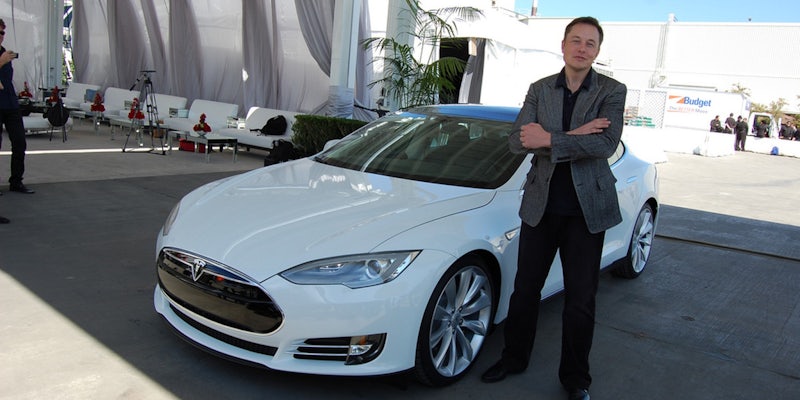 Elon Musk: In the future, we won’t be allowed to drive

'You can't have a person driving a two-ton death machine.'

In the future, says Tesla founder Elon Musk, traditional cars will be a thing of the past. In fact, he argues, none of us will be allowed to drive.

At NVidia’s annual developers conference on Tuesday, the typically bold CEO told the crowd that he thinks cars will eventually reach the same level of automation as elevators.

“You can’t have a person driving a two-ton death machine.”

“It would be like an elevator,” Musk said. “They used to have elevator operators, and then we developed some simple circuitry to have elevators just automatically come to the floor that you’re at. … The car is going to be just like that.”

Musk explained that the logical next move would be to ban driving outright.

“It’s too dangerous,” Musk said. “You can’t have a person driving a two-ton death machine.”

Musk has a reason to be bullish on the success of his self-driving cars. At the end of 2014, CNN reported, Musk claimed that a Tesla car “next year will probably be 90 percent capable of autopilot.” He added that Teslas will “for sure” be able to autopilot themselves down the highway.

But the real problem self-driving cars will face is regular, everyday driving. According to the Verge, Musk said that his company is still working on testing conditions on ordinary street driving (“15 to 50 miles per hour”). Nvidia’s upcoming automation technology could aid that problem.

Musk’s point about cars being dangerous is an easy sell. According to data from the U.S. Department of Transportation, 2013 saw 30,057 fatal motor vehicle crashes and 32,719 total deaths in America. A world in which that could be stopped has obvious appeal.