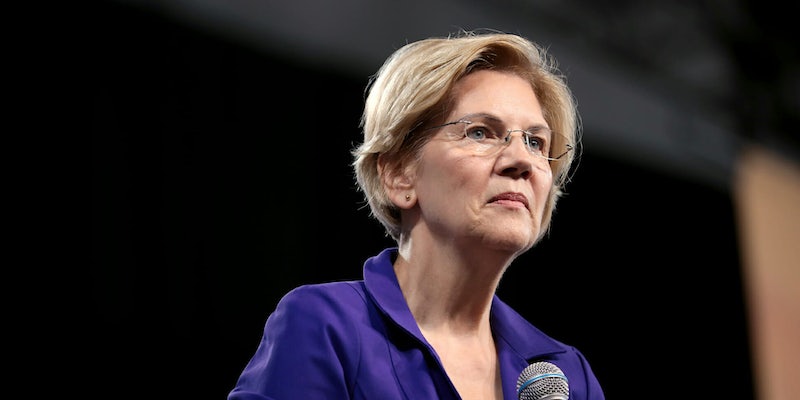 Many people are pointing to the clips as a reason to support her now.

An old interview of Sen. Elizabeth Warren (D-Mass.), a 2020 Democratic presidential hopeful, is inspiring supporters online, when she warned against the 2008 financial crisis a few years before it began.

Warren, then a professor at Harvard University, was interviewed on PBS’s NOW program in 2004. In it, she talks about household debt and criticizes then-Federal Reserve Chairman Alan Greenspan.

A thread was posted on Twitter on Monday with several clips from the interview, which quickly generated a lot of attention from people praising the now-presidential hopeful.

In this '04 interview, @ewarren tried to warn us of the coming crash. Here are 4 clips.

"Alan Greenspan, our national economic leader, stood up for the last 4 years and told Americans 'borrow against your house.' What frightens me is millions of Americans have taken that advice" pic.twitter.com/qeO8xHz5jq

In this second clip, the interviewer displays the widespread attitude that led to the '08 crash."The houses around me are rising in price. It makes sense that I should be able to harness some of that rising real estate value"

Warren proceeds to give him a quick economics lesson. pic.twitter.com/jpTfUfMqPj

In the clips, Warren pushes back against the low standards for lending that were used to give mortgages to Americans that couldn’t afford them.

“What a mortgage company will lend you to buy a house and what you can afford are two very different numbers,” she says. “What they’re looking out for is to make a profit—God bless them, that’s what they’re there to do—they want to make a profit. The way they make the best possible profit is to put you in the largest possible mortgage that you, by scraping and scratching, can make just the few payments, and then they pass that mortgage off to someone else. Put it into a risk pool and move on. They’re off selling the mortgage off to the next guy.”

She also warned that the issue will become whether Americans “can they stay in the house when they get into financial trouble.”

By contrast, around the time Warren was issuing these warnings, President Donald Trump was launching a mortgage company, which folded in 2007.

The economy is something that Warren has touched on repeatedly so far in her primary campaign. But the clips seemed to cement many people’s belief that Warren should be rising in the 2020 Democratic primary polls.

My respect and admiration for this lady is growing! https://t.co/aIBMjrtgav

We can have a President who is smart like this. https://t.co/Yr2V0FDsXr

She knew what was up then and she knows what's up now. https://t.co/6RzajZsfL1

The more i see regarding @ewarren the more i am convinced this should be the next POTUS https://t.co/oA8xgTm4zs

The more I find out about Elizabeth Warren, the more impressed I get. https://t.co/9i5XHI1YH7

Oh man, how can anyone this smart expect to be elected president? Read the whole thread. https://t.co/54RwiNcVK6

Warren has been one of the few 2020 Democratic hopefuls who has pushed out detailed policy positions early in the primary cycle.