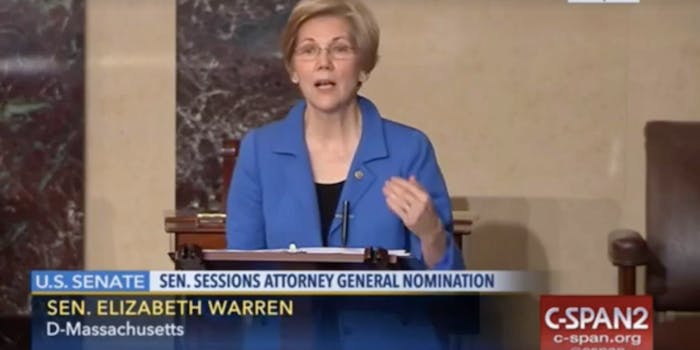 Elizabeth Warren is now forbidden from contributing to the debate about Attorney General nominee Jeff Sessions.

Warren was rebuked for quoting a 30-year-old letter from King, opposing Sessions’ failed 1986 bid to become a federal judge in Alabama. The letter accused Sessions of using “the awesome power of his office to chill the pre-exercise of the vote by black citizens,” criticizing Sessions’ controversial record on voting rights.

The debate was halted when Majority Leader Mitch McConnell accused Warren of violating Senate rules by “impugned the motives” of Sessions as a senator. (Although as the L.A. Times points out, the letter was written long before Sessions became a senator, and is hardly the worst thing we’ve heard from the Senate floor.)

The Senate then voted 49-43 to rebuke Warren, preventing her from speaking again during the debate over Sessions’ nomination. “She was warned,” said McConnell. “She was given an explanation. Nevertheless, she persisted.”

Following her formal reprimand in the Senate, Warren took her criticisms of Jeff Sessions to social media, tweeting, “I will not be silent about a nominee for AG who has made derogatory & racist comments that have no place in our justice system.”

She also posted a full video of herself reading Coretta Scott King’s letter, which has since been viewed 4 million times on Facebook.

During the debate on whether to make Jeff Sessions the next Attorney General, I tried to read a letter from Coretta…

With millions of viewers tuning in on Facebook, and news channels rebroadcasting Warren’s speech on the Senate floor, the vote to silence her evidently backfired. The hashtag #LetLizSpeak exploded on Twitter, with numerous celebrities reading King’s words.

Warren had previously also attacked Sessions earlier in the day for refusing to recuse himself from voting for Education Secretary Betsy DeVos.

“It is a massive conflict of interest. As the AG, Sessions will be responsible for enforcing the law against DeVos if her cesspool of unresolved financial conflicts results in illegal behavior. But apparently, the Republicans just don’t care.”

A vote on Sessions is expected this evening.