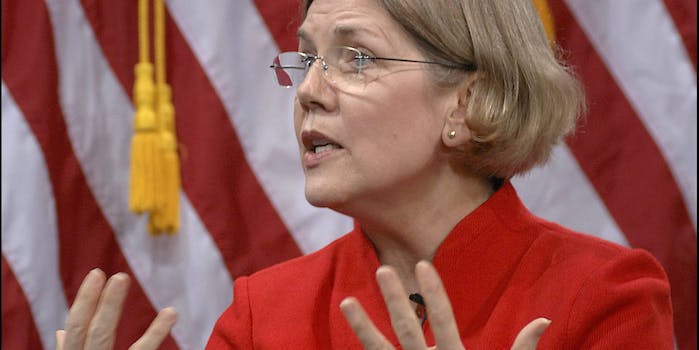 'Disruption creates the push to rethink the basic bargain for workers who produce much of the value in this economy.'

Sen. Elizabeth Warren slammed gig economy companies like Uber and Lyft for taking advantage of workers in a speech on Thursday.

Warren began her speech at the annual conference of the New America Foundation by noting that these ride-hailing companies have made the experience of getting a cab cheaper and more efficient by circumventing long-standing regulations for taxis. However, those cost savings and increased efficiency come at a price.

“While their businesses provide workers with great flexibility, companies like Lyft and Uber have often resisted the efforts of those same workers to access a greater share of the wealth generated from their work. Their business model is, in part, dependent on extremely low wages for drivers,” the progressive Massachusetts senator charged.

In recent years, Uber and Lyft have dramatically slashed their prices—something their competitors are legally prohibited from doing—thereby reducing the take-home pay for drivers. Unlike cab drivers, for whom the cab companies maintain their vehicles and pay for gas, Lyft and Uber drivers have to shoulder all of those costs themselves.

One San Francisco taxicab driver told the Daily Dot that, when he briefly switched from driving a cab to driving for Uber, his hourly income dropped by two-thirds to well below the city’s minimum wage.

“It’s exciting—and very hip—to talk about Uber and Lyft and Taskrabbit, but the promise and risks of these companies isn’t new,” Warren continued. “For centuries, technological advances have helped create new wealth and have increased GDP. But it is policy—rules and regulations—that will determine whether workers have a meaningful opportunity to share in that new wealth.”

Warren compared the situation to the slew of hard-fought worker protections put in place in reaction to the Industrial Revolution, such as establishing a minimum wage, child labor laws, and the right to unionize.

“Each of these changes made a profound difference,” Warren said. “They put guardrails around the ability of giant corporations to exploit workers to generate additional profits at any cost. They helped make sure that part of the increased wealth generated by innovation would be used to build a strong middle class.”

Warren noted the insistence of sharing economy companies to classify workers as independent contractors rather then full- or part-time employees, a system Uber shelled out $84 million as part of a class action settlement to keep in place. This behavior is part of a larger trend among big companies as a way to avoid having to pay for employee benefits.

Noting gig economy jobs often fill in as a stop-gap measure for the under-employed, the former Harvard Law School professor laid out a number of suggestions for regulatory changes that could improve the lives of contract workers.

Warren advocated for gig economy companies to automatically withhold Social Security and other payroll taxes for workers instead of forcing the employees to pay in one lump sum on their annual tax returns. She called for universal catastrophic insurance so employees who get injured and have to drop out of the labor market have something to fall back on—something companies generally don’t offer to contractors.

Warren added that protecting the right to unionize is a key component of ensuring gig economy employees are being treated fairly. It’s also something Uber appearss to be fighting against tooth-and-nail.

The battle between ride-hailing giants Lyft and Uber and efforts by governments to impose regulations upon them reached a new pinnacle in Austin, Texas. Earlier this month, voters in Austin rejected a ballot measure that would have exempted ride-hailing services from having to fingerprint their drivers, a rule imposed by the city council last year.

Following the vote, Uber and Lyft made good on their promises to shut down operations in the city. Other ride-hailing services have attempted to fill the hole the companies’ departure created in Austin’s transportation network, but have struggled to meet demand.

For Warren, this type of flux presents an opportunity for positive change. “In a healthy economy, disruption is inevitable. But disruption means it’s time to adapt to changing circumstances, time for new businesses and old businesses to change, time to rethink the deal for employees, contract workers, and gig workers,” Warren said. “Disruption creates the push to rethink the basic bargain for workers who produce much of the value in this economy.”