The use of national security letters has already been ruled unconstitutional. The question is, will they stay that way?

A critical legal battle for one of the most controversial tools in U.S. law enforcement’s arsenal has begun.

On Wednesday, a panel of three appellate court judges heard opening arguments over a case concerning the use of national security letters (NSL), the use of which was effectively ruled unconstitutional in 2013.

Kurt Opsahl, senior staff attorney at the Electronic Frontier Foundation (EFF), argued on behalf of two clients whose identities are being kept secret by the Patriot Act provision being challenged.

National security letters, or NSLs, are served on telecommunications companies by the Federal Bureau of Investigation (FBI) to demand the private data of American citizens. Unlike search warrants, which require prior judicial review, NSLs are used to acquire sensitive records, including emails, phone records, and financial records, without a court order.

At the center of the issues discussed before the 9th Circuit U.S. Court of Appeals is the constitutionality of a non-disclosure policy that makes it illegal for companies to publicly disclose when they’ve been served with a NSL.

A lower court previous ruled that such gag orders violated NSL recipients’ First Amendment rights. In that decision, the court ruled that the provision of the Patriot Act authorizing the use of NSLs was unconstitutional. Due to the consequence of her decision, Judge Susan Illston placed a hold on enforcing a ban on NSLs until the case could be heard by an appeals court.

Last year’s decision is not the first to address the constitutionality of the NSL non-disclosure provision. In Doe v. Ashcroft (2007), a District Court judge in Manhattan found that the provision was a prior restraint—an official government restriction on speech—that violated the First Amendment. (Calayx Institute founder Nicholas Merrill was later revealed to be the John Doe in this case.) The court permitted the FBI to implement new procedures instead of deeming the law altogether unconstitutional.

The EFF’s case in California argues that whatever new protocols the FBI may have implemented, the use of NSLs and, in particular, the non-disclosure clause remains a violation of civil rights.

“[The U.S. Department of Justice] essentially argued that reforming the gag orders would swamp the FBI in an impenetrable backlog,” Kate Conger, an SF Weekly journalist present at the hearing told the Daily Dot.

“From their questioning, it seemed the judges wanted some of the impetus for reviewing the gag orders to be on the government,” she added. 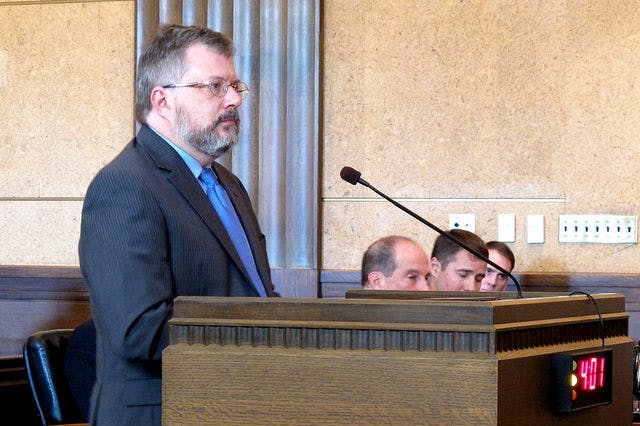 In a related case, Twitter announced on Tuesday that it was filing a lawsuit against the Justice Department and the FBI for placing prohibitions on its speech by restricting the information that it can publicly release in transparency reports, including a more accurate number of NSLs it receives.

Wednesday’s hearing was scheduled to be livestreamed on the 9th circuit website, but the broadcast was cancelled at the last minute due to concerns that secret information might be broadcast. Instead, EFF employees and reporters livetweeted the proceedings:

EFF asks the court to invalidate the entire #NSL statute. The unconstitutional gag is not severable, and the entire law must fall.

Court asks why @EFF clients can’t speak out, and what effect it will have, and how the gag affects them. Can’t answer: gagged. #nsl

Interesting: Judge asks if we can analogize these service providers facing #NSL to newspapers when evaluating their 1A rights.

Court: govt argued that #NSL gag orders are like grand jury gags—why not? EFF: this is a self-certified gag, doesn’t go through any court.

After the arguments concluded, the government declined to speak privately with the judge to discussion portions of the case that are under seal.

Andrew Crocker, a legal fellow at EFF, said there’s no way of knowing when the ruling would come in, but his group hoped the lower court’s decision would be upheld. He added that the appellate court seemed sympathetic to the impact of NSLs on their client’s and, by proxy, the American public’s civil liberties.

The audio of this morning’s #NSL hearing in [UNDER SEAL] v. Holder is now available here: https://t.co/gfEzx3WGiu