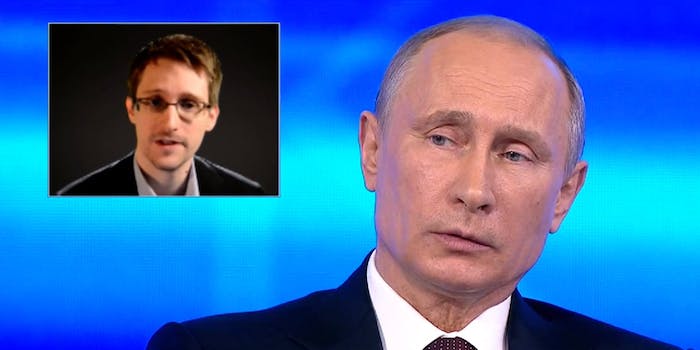 Edward Snowden is proving to be good at surprises.

Exiled American whistleblower Edward Snowden today made a surprise appearance on Russia’s state television channel Russia Today. During a live Q&A with President Vladamir Putin, a pre-recorded message from the former defense contractor was played, where he asked the president whether Russia has a similar system of mass surveillance to the United States, and whether the potential effectiveness of such a system can “justify placing societies, rather than subjects, under surveillance.” 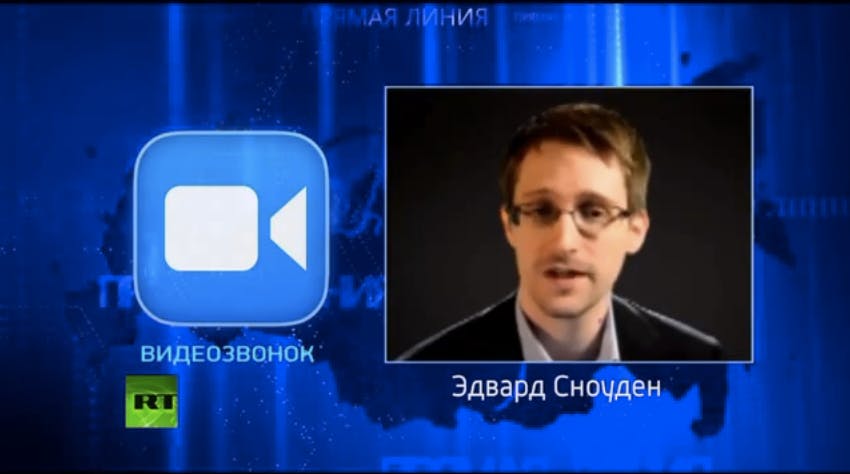 Putin’s response was that while Russia does not have “mass-scale, uncontrollable efforts like that,”  he “hopes we won’t do that,” and that his country doesn’t even “have these technical devices that they have in the States.”

Any surveillance carried out by the FSB (Russia’s Federal Security Service) or other agencies is, he sought to reassure viewers, “strictly controlled by society and… regulated by the law.”

However, in 1995, Russia passed the Russian Federal Law on Operative Search Activity, which according to a report by the International Business Times, allows the FSB to “monitor, analyze and keep all data that is transmitted and received across Russian networks, including but not limited to fax, phone calls, Internet browsing, and email communications.”

There were fears prior to the 2014 Sochi Winter Olympics, held in Russia, that these laws could easily be used to spy on journalists. The country’s track record on press freedom has previously been described by Freedom House as “repressive… [and] encourag[ing] self-censorship.”

Snowden is currently in hiding in Russia after leaking to former Guardian journalist Glenn Greenwald details of the National Security Agency’s vast secretive surveillance apparatus. The security agency stands accused of eavesdropping on the communications of millions of Americans; bugging the phones of foreign leaders, including German President Angela Merkel; and deliberately compromising encryption software.

Watch the full question here, and read the transcript below:

I’d like to ask a question… about the bulk collection of private records by intelligence and law enforcement services. Recently, two independent White House investigations, as well as a federal court, all concluded that these programs are ineffective in stopping terrorism. They also all found that these programs unreasonably intrude into the private lives of ordinary citizens, individuals who have never been suspected of any wrongdoing or criminal activity. And that these kind of programs are not the least intrusive means available to such agencies for these investigative purposes.

Now, I’ve seen little public discussion of Russia’s own involvement in policies of mass surveillance so I’d like to ask you: does Russia intercept, store or analyse in any way the communications of millions of individuals, and do you believe that simply increasing the effectiveness of of intelligence or law enforcement agencies can justify placing societies, rather than subjects, under surveillance? Thank you.

Mr. Snowden you are a former agent—a spy—I used to be working work for an intelligence service. We are going to talk one professional language. First of all, our intelligence efforts are strictly regulated by our law, so how special forces can use this kind of special equipment as they intercept phone calls or follow someone online and you have to get a court permission to stalk a particular person. We don’t have a mass system of such interception and according to our law it cannot exist.

Of course we know that criminals and terrorists use technology for their criminal acts and of course the special services have to use technical means to respond to their crimes, and including those of [a] terrorist nature. Of course we do some efforts like that, but we don’t have a mass-scale, uncontrollable efforts like that. I hope we won’t do that, and we don’t have that much money as they have in the States, and we don’t have these technical devices that they have in the States.

Our special services… are strictly controlled by the society and the law, and are regulated by the law.