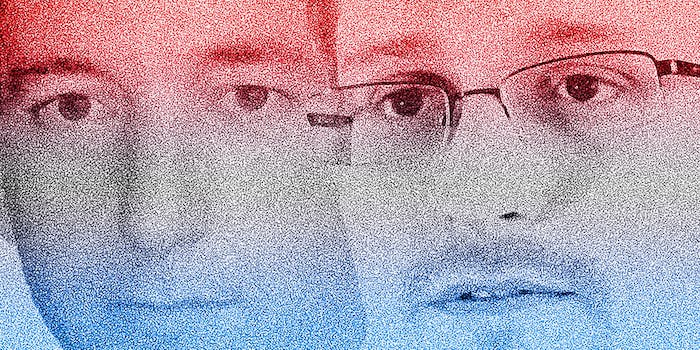 It's no accident Glenn Greenwald received the leaked NSA documents.

Reading Glenn Greenwald’s book No Place To Hide, it’s striking how meticulously Edward Snowden planned virtually every possible element of blowing the whistle on the National Security Agency. And now, one year after the initial publication of the leaks, it’s abundantly clear it was no accident that the revelations seemed deftly choreographed to maximize the damage they would do to the U.S. surveillance state.

In short: Edward Snowden may be a media genius.

Based on Greenwald’s account of his interactions with Snowden, nearly everything about the way the leaks have been handled in the media was, in some way, anticipated and accounted for by Snowden. The book shows Snowden to be incredibly savvy about how the media operates. But nothing he did proves exactly how savvy he was more than his very deliberate selection of Greenwald.

For a variety of reasons, Greenwald may have been the single best journalist in the world to accomplish exactly what Snowden intended—a massive, global backlash to the electronic surveillance state.

By now, this story is well known among privacy advocates: Snowden first approached Greenwald by sending him an email under the pseudonym ?Cincinnatus.” In the email, Snowden encouraged Greenwald to start using email encryption. “There are people out there you would like to hear from you who will never be able to contact you without know their messages cannot be read in transit,” Snowden wrote, offering to personally walk Greenwald through the complicated, often intimidating process of setting up encrypted email.

Greenwald ignored the email. And three days later, Snowden tried again, this time offering to give step-by-step instructions for setting up email encryption. Greenwald responded, insisting he would find someone to help him set up encryption, but never actually got around to doing it.

Snowden eventually changed tactics and contacted documentary filmmaker Laura Poitras, saying he would leak her sensitive government documents, but only if she brought in Greenwald. It was through Poitras that Greenwald was able to finally access the secure channels through which Snowden felt comfortable communicating.

After Greenwald and Poitras traveled to Hong Kong to meet Snowden in person and survey the full breadth of the documents the former government intelligence employee was leaking to them, Greenwald finally respond to Cincinnatus. He wrote that he now had the technical abilities to communicate securely, and was now able to accept whatever information Cincinnatus had to offer. A few minutes later, Snowden looked up from his computer and told told Greenwald that he was Cincinnatus all along.

The moment is striking both for being kind of funny and also for showing just how much Snowden wanted to work with Greenwald. The question is: Why?

In the very first online conversation I had with Edward Snowden, he told me he had only one fear about coming forward: that his revelations might be greeted with apathy and indifference, which would mean he had unraveled his life and risked imprisonment for nothing.

Snowden didn’t want his revelations of the NSA’s omnipresent digital surveillance to become just another blip in the constantly churning 24-hour news cycle—a single day’s worth of outrage destined to be all but forgotten by the general public the following morning. Snowden believed he was throwing his life away by going public. In order to justify that, he had to ensure his actions would serve as a body blow to the global surveillance state. He needed the media to amplify his charges into a chorus that was all but impossible to ignore. As such, he needed to take the utmost care in how those revelations were to be made public.

?To say that this fear has gone unrealized is to dramatically understate the case,” wrote Greenwald, who was instrumental in how those leaks have been received.

From the very beginning, Snowden’s media strategy was clear. He didn’t want to release the information anonymously; he wanted the sentiment behind the leaks to be made explicit. He needed people to know that the problem was systematic.

Snowden predicted that supporters of the NSA’s surveillance efforts would try to make the story all about him. As a result, he knew he needed to essentially disappear shortly after the initial publication of the leaked documents. That way, the media would be forced to focus on the content of his leak rather than his own ongoing personal saga. For that very reason, he maintained a briefly punctuated radio silence for the year since he first went public.

Even so, Snowden understood there would be an attempt by his critics to label him as crazy, driven by a personal vendetta against his former employer, or haunted by personal demons. To preemptively counter these charges, he arranged to have an interview published by established journalists around the time of the first articles based on the leaks. This interview would give him the personal credibility necessary to present himself to the public as a sane, rational former public servant moved to drastic action by what he saw as gross injustices in the system.

And then he would disappear, leaving the journalist who interviewed him as the new public face of the leaks—yet another reason the journalist had to be chosen with great care.

Snowden needed someone who was in establishment media but was not of establishment media. Publishing the leaked documents had the potential to trigger serious legal consequences, so having the backing of a deep-pocketed media organization that employed a phalanx of experienced, high-priced lawyers was crucial. It also ensured that the initial story would receive a wide readership instead of being exclusively confined to a niche audience.

After a career as a constitutional lawyer, Greenwald began writing critically about U.S. national security policy in the mid-2000s. At the time Snowden contacted him, he was a columnist with the progressive U.K. newspaper the Guardian—a centuries-old institution that is one of the most well-established English-language publications on the planet. Taking advantage of both the Guardian’s resources and reputation as a source for serious journalism was crucial.

Greenwald’s prior experience as a constitutional lawyer also likely played a part. Snowden knew that Greenwald’s history litigating First Amendment cases would give him more confidence to publish stories that could anger the government.

It also mattered that the Guardian wasn’t primarily a U.S. publication. Greenwald writes about how, ?the patriotism of the American press,” creates a domestic media environment where journalists are more willing to work with the government—altering, spiking, and holding stories at officials’ requests—than foreign outlets. While the revelations deeply implicated GCHQ, the U.K.’s primary spy agency, the core of the matter was based in the United States and the Guardian’s location across the pond gave them a measure of independence.

Snowden’s fears about U.S. media buckling under government pressure were based in history. The New York Times, for example, waited a year to publish a story about the George W. Bush Administration’s authorization of the NSA to conduct domestic surveillance. The only reason the story eventually saw the light of day at all was because Times reporter James Risen, fed up with his employer’s timidity in releasing the piece, was about to publish a book containing the information and the paper didn’t want to get caught with its pants down by being scooped by its own reporter.

Yet, Greenwald also had an independent streak, a true-believer with a long history of being critical of the entire national scrutiny apparatus.. He had only been at the Guardian for about a year and, if the paper decided to spike the story, Snowden knew that Greenwald wouldn’t be afraid to take it elsewhere—something that nearly happened after the paper dragged its feet for a few days before deciding to publish its first story on the leaks, according to Greenwald.

There’s also the issue of location. Even though he was born in the United States, Greenwald lives in Rio de Janeiro, Brazil. Once again, physical distance from U.S. law enforcement had the potential to lend Greenwald a bit extra personal protection from being arrested or detained.

Still, having an American be the one to do the reporting on the NSA was clearly important to Snowden. If criticisms of U.S. security policy came from a foreigner, they would be easier to dismiss. This is also why, according to Greenwald, Snowden gave the leaked documents pertaining to GCHQ to the Guardian‘s Ewen MacAskill, a U.K. citizen.

Almost everything about how the discourse about privacy and security has played out was orchestrated very deliberately by Snowden himself. It shows that Snowden understood just releasing the information wasn’t going to be enough to achieve his goals. He also needed to manage the process by which that information was released. And so far, his plan has worked.

Correction: An earlier version of this article misspelled the name of the Guardian reporter provided leaked documents concerning GCHQ. It’s Ewen, not Ewan. We regret the error.