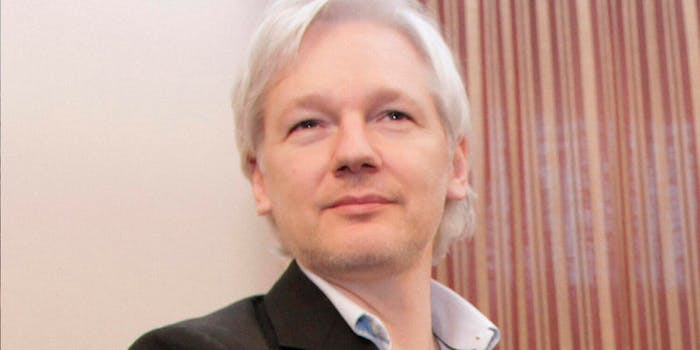 Fidel Narváez worked at the embassy where Julian Assange resides in asylum.

Narváez, who worked at the embassy in which WikiLeaks founder Julian Assange resides in, described the claims as a “fake story.” Navarez was at the embassy from 2010-18, first as consul then as first secretary,

The article, published in the Guardian, claimed that Manafort met with Assange on three occasions—2013, 2015, and in March 2016. These meetings, the article claimed, took place at the Ecuadorian Embassy in London, where the WikiLeaks founder has resided since 2012 to avoid extradition.

Months later, in the run-up to Election Day, the transparency organization published emails stolen from the Democratic National Committee and Hillary Clinton campaign.

Manafort has repeatedly denied involvement in the email leaks, but if he met Assange in March 2016, it would be of great interest to special counsel Robert Mueller’s team, investigating both the hacks and allegations of Russia-Trump campaign collusion.

The former consul, however, told left-wing news outlet the Canary that Manafort had not visited Assange on the dates in question.

“It is impossible for any visitor to enter the embassy without going through very strict protocols and leaving a clear record: obtaining written approval from the ambassador, registering with security personnel, and leaving a copy of ID,” Narváez said.

“The embassy is the most surveilled on Earth; not only are there cameras positioned on neighbouring buildings recording every visitor, but inside the building every movement is recorded with CCTV cameras, 24/7,” he continued. “In fact, security personnel have always spied on Julian and his visitors. It is simply not possible that Manafort visited the embassy.”

Reacting to the Guardian’s story last Wednesday both WikiLeaks and Manafort also denied that any meetings between the two men had taken place and are seeking to take legal action against the newspaper.

Indeed the newspaper’s article had been quickly called out as problematic by several high profile journalists and outlets, including the Daily Dot.

Not only does the article rely heavily on anonymous sources, in contradiction to the embassy’s visitor logs, it also cites an unverified secret memo allegedly written by Ecuador’s dismantled intelligence agency.

“This story relied on a number of sources,” the Guardian said in a statement issued in its defense. “We put these allegations to both Paul Manafort and Julian Assange’s representatives prior to publication. Neither responded to deny the visits taking place. We have since updated the story to reflect their denials.”