How app developers are capitalizing on Ebola

While some Ebola apps are informational, others are purely capitalizing on an SEO or App Store search term.

Ebola hysteria in the United States has reached, pardon the expression, a fever pitch. All over the country, spurred on by panic-stricken Facebook posts and overstated headlines, people are convinced the end times are near. And where there’s mass hysteria, there are app developers looking to capitalize on the people’s panic.

The violent and lethal disease has been cropping up stateside, and the Dallas Morning News reported Wednesday that health workers at Texas Health Presbyterian Hospital Dallas (aka the Ebola Hospital) didn’t wear hazmat suits for two days until patient Thomas Eric Duncan was officially diagnosed. This means many more people could have been exposed, and  naturally concerned citizens are frantic and looking for answers.

It appears that at least two apps have been specifically developed to track the spread of Ebola. Ebola Near Me and Ebola Tracker take a user’s location and pinpoint the closest reported case.

For example, Ebola Near Me shows that the case nearest to the Daily Dot NYC office is in Omaha, Neb. So we’re safe (FOR NOW). 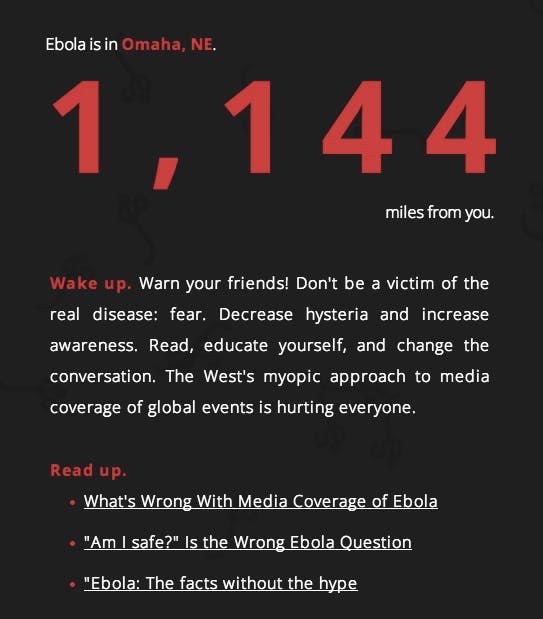 According to Ebola Tracker’s App Store description, it’s updated daily to reflect the latest outbreak data. It also has a map showing the range of outbreaks, the number of new cases in the last 24 hours, and where you can find Ebola near you. All this for $2.99.

But novelty app developers aren’t the only ones capitalizing on the Ebola scare. Flu Near You, a crowdsourced app originally developed to track—you guessed it—the flu, announced on Monday plans to branch out to other illnesses. They’ve been tracking the outbreak of Dengue fever in Puerto Rico, and the natural next step is Ebola.

One of the app’s developers, Dr. Florence Bourgeois of Boston Children’s Hospital, told the Boston Business Journal, “It’s been very successful at engaging users and getting people to contribute info. Based on this, (we) have enough information to think about next steps and how to broaden this to other diseases.”

The only danger with using a crowdsourced app to check on the latest Ebola stats is that a lot of people think they have it, when they almost certainly do not (and if anything could heighten mass hysteria right now, it’s thousands of inaccurate reports of Ebola).

Flu Near You sends a survey to 120,000 registered users weekly and asks them to report any symptoms. But the odds that you saw your neighbor at the grocery store with Ebola-like symptoms are unlikely.

Apps that track the location of cases aren’t the only ones capitalizing: A quick App Store search reveals titles like Ebola Outbreak (a game where you’re a lab tech trying to find a cure), Ebola: All You Need to Know (a $0.99 sheet of information), and Trap Ebola (which features a characterization of Ebola that looks like an evil Pac-Man). 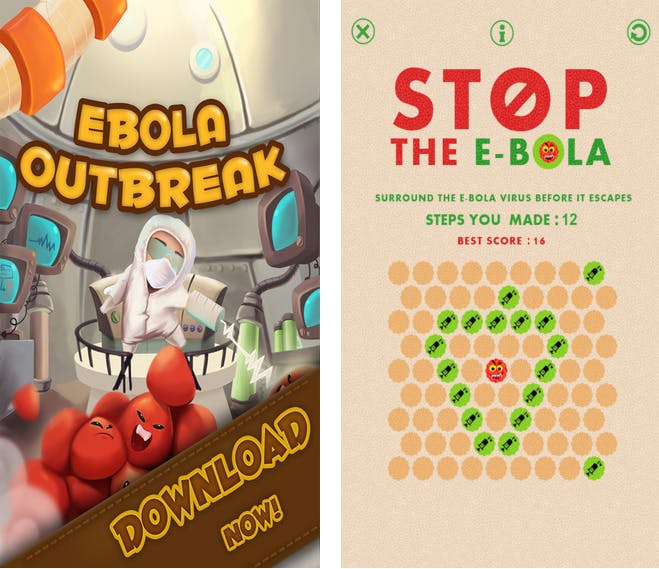 Tellingly, all of these apps were launched in the App Store within the last two months. Clearly, developers are keen to take advantage of a trend, even when that trend is a deadly disease. If users will search for it (and truly, we are searching for it), they will code it.

A total of eight cases have been reported within the United States, and the only thing most of these apps are really good for is feeding the chaos. Chances are, if there’s a case reported near you, you’ve already heard about it on every website, blog, TV station, Twitter feed, and local newspaper.

But don’t worry. Fox News’ Shep Smith says no one is actually panicking. Time for these apps to close up shop.