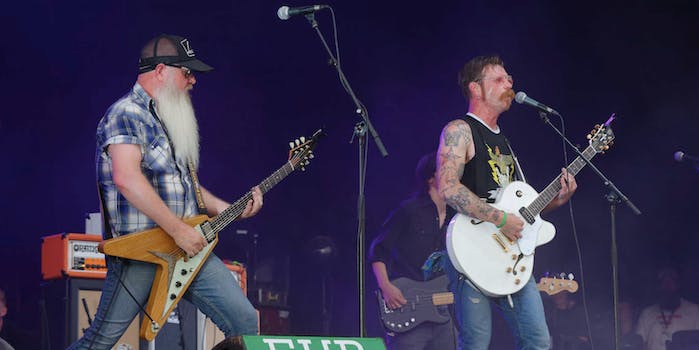 They posted on Facebook to say they're still trying to locate them.

Chaos took hold of Paris Friday evening as seven separate, but apparently coordinated, terrorist attacks unfolded. The largest number of casualties—potentially 100—were reported at the Bataclan, a concert venue in the center of the city where American rock band Eagles of Death metal were playing a show.

The band’s main members are Josh Homme and Jesse Hughes and hail from Palm Desert, California. A relative of Hughes told local ABC affiliate KESQ that he “was on stage when the gunmen entered the concert through multiple doors.” Homme was not present at Friday evening’s performance.

They also have several other live members touring with them, including drummer Julian Dorian, guitarist Dave Catching, Matt McJunkins on bass and vocals, and Eden Galindo on guitar and vocals.

Dorio’s mother Mary Lou Dorio confirmed to the Washington Post that her son also managed to escape the Bataclan at the start of the attack. “It was awful,” she said. She also confirmed that he was safe at a local police station.

According to Alternative Press, “A representative for Eagles Of Death Metal has confirmed that band member Eden Galindo is unharmed.”

But the exact whereabouts of Catching, McJunkins, and other crew members is still unknown. The band posted to Facebook to provide an update on the situation.

Absolutely numb to hear the great Dave Catching is unaccounted for at the venue.

Just heard there's a possibility former @30SECONDSTOMARS crew may be among the hostages / victims. Unbelievable tragic and horrific.

Update 9:35am CT, Nov. 14: A New York Times reporter confirmed via Twitter that no band members were lost in Friday night’s massacre at the Bataclan. There have been reports that one crew member was killed, one shot and injured, but that has not been confirmed by the band yet.

Update 8:22am CT, Nov. 15: It has been confirmed that Nick Alexander, the band’s merch manager, was killed on Friday night.

Update 1:07pm CT, Nov. 18: The band released a statement to Facebook on Wednesday.