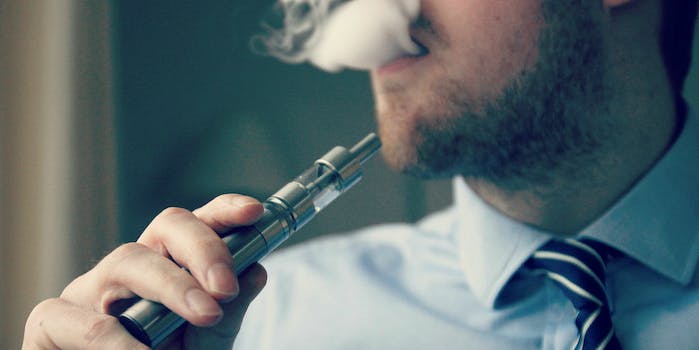 There are currently no regulations on e-cigarette components.

A 38-year-old man in Florida was killed in what appears to be the first death caused by an e-cigarette explosion. An autopsy report released last week confirms the exploding vape pen sent projectiles into his head and started a small house fire.

Tallmadge D’Elia was found by firefighters in the burning bedroom of his family home on May 5. The cause of death was listed as “projectile wound of head,” resulting from the explosion that sent two pieces of the pen into his cranium. He also suffered “thermal injuries” or burns to about 80 percent of his body. The incident was ruled an accident.

According to the report, the pen he used was a “mod” type, or a modified e-cigarette designed to be customizable. Typically, more experienced users purchase mods to enhance the battery or functionality of the device. The mod pen, distributed by Smok-E Mountain, is manufactured in the Philippines. The company’s Facebook page is no longer active, though other retailers are still selling Smok-E Mountain-branded mods.

A spokesperson for Smok-E Mountain told ABC affiliate WFTS that the problem had to do with the atomizer (the top piece you put in your mouth) or the battery.

This is thought to be the first recorded death caused by a vape pen explosion. Similar incidents have occurred in the past, resulting in serious injuries. A report from the U.S. Fire Administration blames 195 incidents from 2009 to 2016 on e-cigs exploding or catching fire, resulting in 133 injuries of which 38 were severe.

These incidents are typically attributed to the device’s lithium-ion battery. When batteries heat up due to inadequate venting, a chemical reaction occurs that causes them to heat up even more. This cycle continues until the energy produced needs to escape. The reaction is called thermal runaway, and it results in explosions or fires.

“No other consumer product places a battery with a known explosion hazard such as this in such close proximity to the human body,” the U.S. Fire Administration report notes. “It is this intimate contact between the body and the battery that is most responsible for the severity of the injuries that have been seen. While the failure rate of the lithium-ion batteries is very small, the consequences of a failure, as we have seen, can be severe and life-altering for the consumer.”

While the long-term effects of smoking e-cigarettes continue to be debated, it’s clear the electronic mechanisms of the devices put users in danger. There are currently no regulations ensuring the safety of e-cigarette batteries and components, the U.S. Fire Administration points out. The U.S. Food and Drug Administration, which has a guide with tips on avoiding e-cig explosions, is reportedly considering safety legislation.