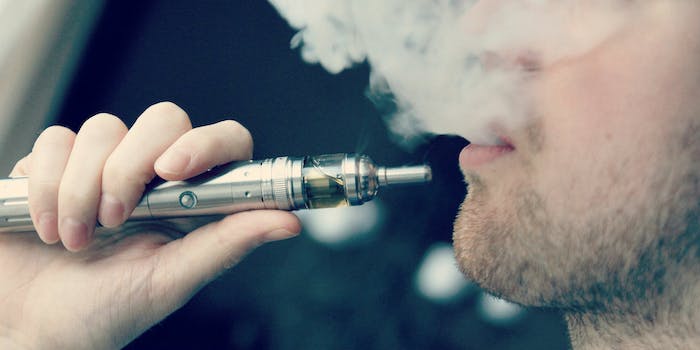 Since the e-cigarette craze took over at the start of the decade, medical researchers have fiercely debated the health risks of vaping.  One contradictory study after the next has added to the uncertainty of these nicotine-filled gadgets. Now a new report on e-cigarettes shines a powerful light on the benefits and potential dangers of e-cigs.

Published by the National Academies of Sciences, Engineering, and Medicine’s panel of health experts, the report, considered the most comprehensive to date, analyzed 800 peer-reviewed scientific studies to make dozens of conclusions about vaping. The most surprising of which is “substantial evidence” that e-cigarettes can tempt youths into trying combustible cigarettes, raising the likelihood of addiction. It was previously believed e-cigarettes could be used as a cessation tool, but these new results suggest it may also be a gateway to smoking more harmful substances. The conclusion echoes a study by the University of Michigan that claims teenagers who use e-cigarettes are four times more likely to start smoking tobacco within a year.

Other takeaways from the report are more favorable toward e-cigarettes. Citing “conclusive evidence,” the board found e-cigarettes are safer than traditional cigarettes since they don’t contain as much deadly tar, toxicants, and carcinogens, and that the short-term effects of switching result in fewer adverse effects to multiple organs. The report points out that the amount of nicotine and particulates in second-hand exposure to e-cigarettes vapor is also lower than that of conventional cigarettes.

“Under the assumption that e-cigarette use increases the rate at which adults quit conventional smoking, modeling projects that use of e-cigarettes will generate a net public health benefit, at least in the short run,” the report states.

But the researchers worry about the long-term effects of vaping, which can’t be derived given the short amount of time e-cigarettes have been on the market. Other conclusions gathered from the study suggest those consequences could be similar to the long-term health effects of regular cigarettes. In addition to nicotine, most e-cigs contain and emit potentially toxic substances. Additionally, the amount of nicotine intake in e-cigs for adult users is similar to that of regular cigarettes. However, there was no available evidence to suggest e-cigarette smoking increases the risk of cancer.

“The harms caused by the higher rate of conventional cigarette smoking among youth who had used e-cigarettes will take decades to appear,” according to the report. “For long-range projections, the net public health benefit is substantially less, and under some scenarios the net impact is harmful.”

This new report further outlines the uncertainty of e-cigarettes and whether they can be used as a safe cessation tool for cigarette smokers. But it does make some assertive conclusions: e-cigarettes have definite short-term benefits over regular cigarettes, but only for adults. For teenagers, they could do more harm than good.

“E-cigarettes cannot be simply categorized as either beneficial or harmful,” said David Eaton, chair of the committee. “In some circumstances, such as their use by non-smoking adolescents and young adults, their adverse effects clearly warrant concern. In other cases, such as when adult smokers use them to quit smoking, they offer an opportunity to reduce smoking-related illness.”